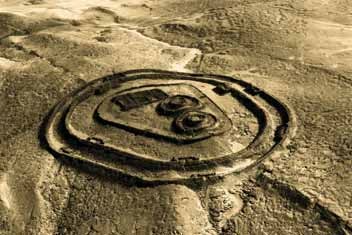 Tucked away in the Peruvian Andes, some 400km north of Lima, is a large, 2300-year-old ancient ruin named Chankillo.

A plan view of the concentric and seemingly-fortified walls of the central complex is not unlike some electric razors, and archaeologists have dubbed the site “Norelco” — the United States equivalent of Philips.

Until last year, no one had figured out what it was a ruin of. Its location on a hill and its thick walls suggested it had been a fort.

However, the walls are pierced by numerous gates, it lacks a defendable water source, and it appears to have no strategic value.

Then on 13 January 2002, the IKONOS sensor of the GeoEye satellite captured a fabulous image of the site.

The detail this shows has allowed a team working out of Leicester and Yale universities, Ivan Ghezzi and Clive Ruggles, to explain at least part of the site.

South-east of the central Norleco complex are 13 low towers. These straddle a ridge, resembling a curved spine. They are regularly spaced along the hilltop, from 2m to 6m high, and 4.7m to 5.1m apart.

Each tower has a pair of staircases on their north and south sides that lead to the top. They are surrounded by fortifications, including thick walls with gates and parapets.

The towers can be easily seen from the Norelco ruins, 200m to the west where, along with the double courtyard and 40m-long exterior corridor, there is an observation point.

Archaeologists have found pottery and other materials here that would seem to have been brought as offerings by those viewing the towers.

However, it is the view from the two groups of derelict ruins on either side of the towers that has proved quite illuminating in more ways than one.

Chankillo then, is remarkable not only as the earliest known complete solar observatory in the Americas, but it defines all major aspects of the solar year. As a calendar it is accurate to within a few days throughout the year.

Ghezzi and Ruggles believe the entire site is some type of fortified ceremonial centre, perhaps a temple. We know the Incas were making careful solar observations by 1500 AD.

The 13 towers, presumably then, indicate much earlier sophisticated sun cults, circa 400 BC. Not only do the ruins predate European arrival by 1800 years but they precede, by some 500 years, similar monuments built by the Mayans in Central America.

Other ancient solar observatories have often been interpreted as providing information as to times to plant and times to harvest. My experience as a country boy tells me any farmer — or peasant for that matter — knows when to sow and reap without the need for a vast pile of stones or a priestly hierarchy.

Less ancient historic observatories in other cultures are known to have been linked to sacrifice (usually human) or as a means of defining the optimum times for the resident tribal leader, be they emperor or empress, to have sex.

The South American kings regarded themselves as offspring of the sun, and political implications can be read in Chankillo. It makes a statement of how society was organised, as to who had power, and who did not.