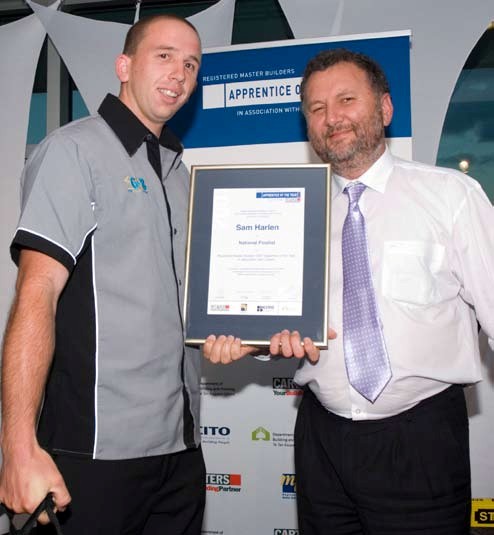 Tauranga builder Sam Harlen says he was quietly confident of at least making the finals of the Bay of Plenty regional Apprentice of the Year competition last year, but was thrilled to be named the regional winner.

Sam competed against 15 apprentices from throughout the Bay of Plenty region to be named the regional winner in the 2007 Apprentice of the Year competition — a joint initiative led by principal sponsor Carters, the Registered Master Builders Federation (RMBF), the Building and Construction Industry Training Organisation (BCITO) and the Department of Building and Housing (DBH).

His prize package included a $2000 study grant, an Outward Bound course worth $2500 and a wide range of tools.

Sam says it was his boss at Gene Hollands Building Ltd and his tutor, Phil Grimmer at Bay of Plenty Polytechnic, who encouraged him to enter the competition.

“Gene was really keen for me to enter the competition, as was my tutor at the time. Once I had submitted my entry I was fairly confident I would be named a finalist, but I certainly wouldn’t have entered without their support.”

In order to be considered for the competition, Sam had to complete an entry form detailing some of his best work as an apprentice and provide references from his employer and BCITO training advisor.

He was then interviewed by a panel of judges made up of representatives from the RMBF, Carters and the BCITO, followed by a visit to the site he was working on at the time.

“Winning the regional competition was a big confidence boost and has given me confirmation I have the ability to be a top builder one day. It’s really opened my eyes to what I can achieve in construction and given me some great leadership skills.”

Sam says he now has some clear goals for his future in construction, an industry that he has been committed to since his school days.

“I always enjoyed woodworking at school and had some obvious ability in construction. After leaving school I started labouring, and was offered an apprenticeship after a couple of months.

“I really love the industry and have worked on some great projects. Currently I’m working on a large residential project in Cherrywood, Tauranga.

”Now fully qualified, Sam is putting the study grant he won from the 2007 competition towards the National Certificate in Construction Level Five. He says he plans to travel in the next few years before starting up his own building company.

“Winning the Apprentice of the Year competition has helped me to focus on my goals for the future, and to know that I can achieve anything that I set my mind to.

“I’d definitely encourage other apprentices to get involved in the competition. If you are confident in your approach you can achieve anything you want.”