Home Latest News Giving back to the community 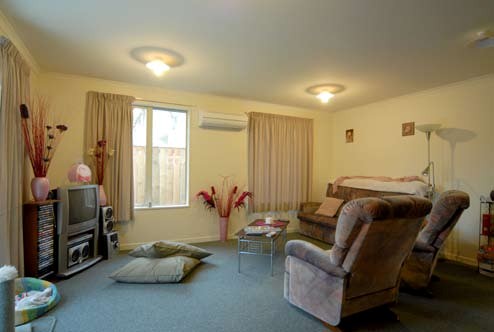 Hard work, competitive budgeting and a fair dose of goodwill were the vital ingredients required by Tasman Holdings to create four well-built but affordable homes for the not-for-profit Nelson Tasman Housing Trust.

These qualities also saw them awarded national winner of the Housing New Zealand Community Development Award in the Registered Master Builders 2007 House of the Year, in association with PlaceMakers.

“They came to us with what many builders would have considered an impossible brief — to source land and build four two-bedroom homes on it that could be sold for just over $225,000 each.

However, from the onset we viewed the project as a challenge, which encouraged us to make it happen”, Mr Turner says.

Arguably one of the most difficult aspects of the project was sourcing the land, which took six months of searching. The struggle wasn’t over there — not only did Mr Turner and his team encounter obstacles in getting the land through the council’s building consent process, there was also a 100-year-old home on the site which had to be relocated to make space for the houses.

With only 980sq m of available land, Tasman Holdings chose to create two duplexes which gave them economies of space and “were a nice compromise between stand-alone houses and an apartment block”.

The other major challenge of the project was finding ways to cut costs while maintaining quality.

“We had to be creative, but a number of our long-serving suppliers also got into the spirit of things and provided their services at very competitive rates.

“There was a lot of goodwill in the project — we still made a profit but I would say most of us considerably reduced our margins.”

Mr Turner says there is no doubt there was a socially-minded quality to the project, and the ability for Tasman Holdings to be involved was a matter of timing more than anything.

“We’ve been trading for 12 years and have done a number of good profitable commercial projects within that time. When a not-for-profit organisation attempting to establish itself approached us with the vision of supplying affordable housing to people genuinely in need, we wanted to help and, fortunately, were in a position to do so.”

Once the build of four homes was completed, the Nelson Tasman Housing Trust furnished the properties so they were completely ready for their first tenants — who were delighted with their new homes.

“The Housing Trust told us that some of the tenants had tears in their eyes when they first moved in, and I’ve been told that none of the original tenants have left yet. They’re obviously pretty comfortable!”

Mr Turner says winning a national House of the Year category was a special bonus on top of what was an already rewarding project.

“We were new Federation members and had to be prompted to enter the awards as we weren’t aware that the Housing New Zealand Community Development Award existed,” Mr Turner admits.

He says the announcement that Tasman Holdings was a category winner at the national gala dinner was a complete surprise — made even more special by the fact the award was announced by Prime Minister Helen Clark.

“Going up to accept the award after the Prime Minister had spoken was a bit of a shock to the system. I think I got through it alright!”

Clearly, modesty and generosity are the other ingredients which have contributed to Tasman Holdings’ long-term business success.