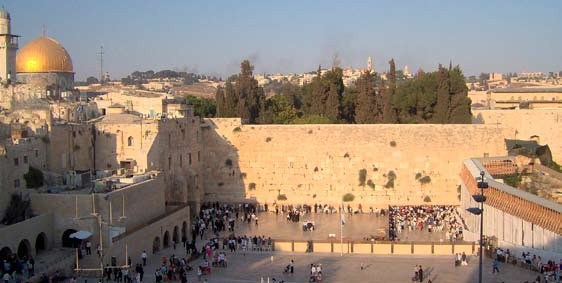 Forty-one years ago the Israeli army occupied Jerusalem. For the first time in nearly two millennia the city was united and back in Jewish hands.

One iconic photo marks this historic occasion — three exhausted Israeli paratroopers standing in awe alongside the Western Wall, known in popular parlance as the Wailing Wall.
For all Jews the Western Wall, or Kotel in the Old City of Jerusalem, has become a most sacred site. It is a surviving remnant of the Second Temple.

For centuries it has provided the closest accessible site to the Holy of Holies, the Even ha-shetiya or Foundation Stone, the rocky outcrop where once the Ark of the Covenant stood.
The stone now lies beneath the Muslim’s Dome of the Rock on Temple Mount, with access prohibited to Jews.

It all began three millennia ago when King Solomon raised his Temple on the Mount. This building stood until 586BC when it was destroyed by the Babylonians.

A second temple was built 70 years later. It continued until given a massive makeover about 19BC by Herod the Great. This included artificially expanding the summit area by constructing a large platform that was supported by massive retaining walls. It is one of these perimeter supports that comprises the Western Wall today.

In 70AD Herod’s revamped temple was razed by the Romans, along with the rest of Jerusalem. Six hundred years later the location was in Muslim hands and the gold-clad Dome of the Rock had been built over the site.

However, the Western Wall had survived and when Ottoman Sultan, Selim I, arrived in 1517 he found it buried beneath rubble. He ordered it exhumed and doused the remains with rosewater.

For Muslims the site is “El-Buraq”, the place where Muhammad tied up his wingéd horse that he had brought from Mecca. He entered a cave on Temple Mount to meet with the other prophets, including Moses, Jesus and Elijah.

Today some 490m of wall remains on the western flank of Temple Mount. Most is hidden behind residences. One 57m-long section faces an open plaza and is used for prayer.

Believers wedge petitions in cracks between the stones and, for those distant from Jerusalem, at least one IT service provider lays on an e-mail/fax service to which supplicants can send notes to be placed in the Wall.

The exposed section is 19m high and extends a similar amount below the ground. It consists of 45 stone courses, 28 above ground and 17 below. The first seven visible layers date from Herod’s renovations, and contain stones commonly from two to eight tonnes in weight.

The upper 10m of the wall was originally 1m thick and provided a double colonnade for the platform above.

Large stones have been employed throughout the buried courses, with one in the northern end being an incredible 13.6m long and estimated to weigh at least 570 tonnes.

Upper courses have been added to the wall in later periods, including 14 during the Ottoman occupation in 1866 at the request of Sir Moses Montefiore, “for shade and protection from the rain for all who come to pray by the holy remnant of our Temple”. The three top-most layers were placed by the Mufti of Jerusalem prior to 1967.

The Western Wall became a major prayer site for Jews about 700 years ago when Jewish settlement recommenced in and around Jerusalem. The area west of the Temple Mount was deserted, and Jews looking for a quiet place to pray close to Temple Mount found the Western Wall.

Of itself, the Wall held little religious significance but its cultural importance has grown immeasurably since.

For hundreds of years, access to the Wall was at the whim of the latest conqueror and occupier of Jerusalem. On occasions this was forthcoming. At other times worship was actively discouraged.

Unsuccessful attempts were made by wealthy Jews to purchase the Wall and adjacent land, including one by Baron Rothschild in the1880s.

Nothing had been resolved when General Allenby captured Jerusalem in December 1917. The British now found themselves squarely in the middle of a bitter dispute between Jews and Arabs, with the wall providing a focal point to express their mutual discontent.

Bloody riots erupted in 1929 when Muslims demanded that seats placed at the Wall for elderly Jews be removed, along with the screen that separates male from female devotees.

In the 1948 Arab-Israeli War, the Old City, together with its Wall, was captured by Jordan. They held it until day two of the Six Day War when, for the first time since 70AD, it was restored to Israeli hands.

Buildings along its length were demolished, and the tiny plaza that had fronted the wall pre-1967 began its expansion to the 20,000 sq m it occupies today.

In 1968 cleaning and clearing of the area revealed an entrance to a 488m-long tunnel. Inside was one of the gates that used to lead to the Temple.

It is now blocked but, as Jews may not set foot upon Temple Mount, this gate provides the closest point Jewish worshippers can come to their Holy of the Holies.
And there’s more! Try experiencing the wall live on-line at www.aish.com/wallcam.