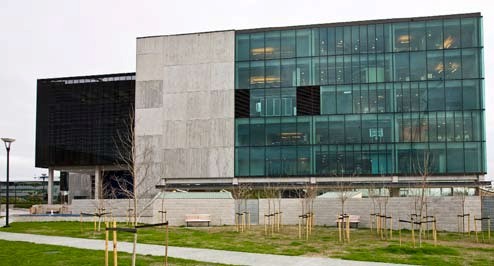 Big successful projects aren’t unusual for Mainzeal Property and Construction, which took out the 2008 RMB Commercial Project of the Year for Sovereign House — an innovative new office building in Takapuna, Auckland.

As one of New Zealand’s leading construction companies, Mainzeal secured the project partly from a past relationship formed with the clients, who had used Mainzeal for a previous job. Mainzeal project director John Hemi says while it was put through a limited tender process, the client, ASB Group Property, had appointed the same team of consultants and associates who had worked with Mainzeal on a past project.

“That gave us a definite advantage when going for Sovereign House.” The project team was on site from November 2005 preparing for the $63 million job, which took 19 months to complete.

Mr Hemi says the project was particularly interesting because of its unique design. Acclaimed Australian architect James Grose, of Bligh Voller Nield, used the philosophy of a village — an inclusive, social place — to produce a sense of ownership and encourage maximum interaction between the occupants of the building. “The building is a one-of-a-kind office space designed from the inside out. One of its aims is to promote informal interaction among the people working in it,” Mr Hemi says.

The building’s innovative design was a challenge for project manager Murray Svendsen and his construction team, partly because few of the plans had been completed when construction started. “We were working to a very ambitious time frame, and the fact that the design was not finished when each stage of construction began certainly added to the complexity of the project,” Mr Svendsen says.

Mr Hemi maintains that much of the success of Sovereign House can be attributed to the strong relationship between all parties involved in the project. “Open and co-operative partnerships gave us the ability to quickly and efficiently work through problems and issues. “This sort of relationship holds a certain level of risk, and it was crucial that all parties had a high degree of trust in each other.”

Mr Hemi, whose 25-year career in the construction industry includes 15 years with Mainzeal Property and Construction, says being involved in projects such as Sovereign House is one of the reasons he enjoys working for the company.

“Mainzeal has had the privilege of building a range of high-profile and iconic buildings in New Zealand, Sovereign House being one of them. It’s a real buzz to work hard on these projects, and then to be recognised for the work we’ve delivered makes it even more worthwhile.”

Mainzeal Property and Construction started its relationship with Registered Master Builders in 1975. Mr Hemi recognises that the RMB Commercial Project Awards are about innovation, quality and delivering building excellence, which he says Mainzeal always strives to achieve.

“I know of at least a handful of projects that Mainzeal will be entering in the 2009 awards.  I think the company realises what an achievement it is to obtain a top award in New Zealand’s most prestigious commercial building awards and, as a result, we’ll definitely be giving it another shot this year.”