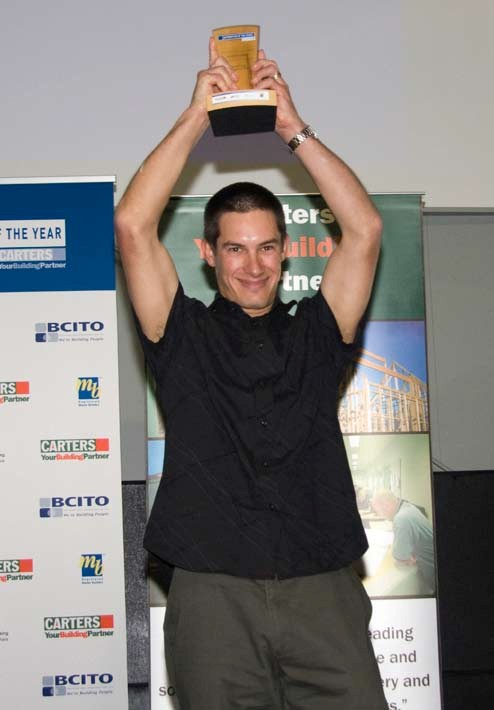 Tauranga carpentry apprentice Shane Swan says what he loves about building is the satisfaction of finishing a project which you know you have worked on from start to finish. Shane was named runner-up in the Registered Master Builders Carters 2008 Apprentice of the Year competition in October. He and winning Apprentice of the Year, Joe Dobson, were presented with their awards at a ceremony in Wellington.

Shane was introduced to the building trade through his wife’s extended family, many of whom are builders. “I wanted a career which would allow me to be both active and creative — so I chose building,” he says.

Shane started his apprenticeship in Auckland three years ago, and after working with a couple of small building companies there, he returned to his home town of Tauranga with his wife and began working with Gary Riddell of Riddell Construction.

It was his BCITO training officer, Tim Buxton, who suggested he enter the Apprentice of the Year competition. He was also persuaded to enter partly by the age limit of the competition. In his third year of an apprenticeship, and at 25 years of age, 2008 was his last chance to give it a go.

He puts his success down to being actively involved in all areas of the construction projects he has worked on, as well as dedicating time to completing his entry form and preparing for the competition interviews.

“I think the judges wanted to see that entrants had demonstrated a level of leadership on their jobs. I also spent a lot of time preparing my entry material, researching aspects of the Building Code and talking to people in the industry. You can never be too prepared!”

As the regional winner from Tauranga, Shane was flown to Wellington in October 2008 with the nine other finalists from around the country. The finalists attended the national awards ceremony along with other activities, including morning tea with former Minister for Building and Construction Shane Jones.

“It was a real privilege to go to Wellington and meet the other regional winners. I had no idea how I would go though. In my mind I had picked Joe (Dobson) as the winner, but I didn’t think I would come in second!”

Shane said the opportunity to meet the other apprentices that shared his motivation and positive attitude was fantastic and a “good networking opportunity for the future”. And while he is optimistic, Shane is realistic in his major goal for 2009 — to keep his job.

“I know there are tough times ahead which makes it all the more important we ensure our customers are happy with the work we do. “Any experience is a good experience though, and I think I’ll learn a lot from this downturn that will help me later in my career when I hope to establish my own business.”

Entries in the Registered Master Builders 2009 Apprentice of the Year, in association with Carters, will open in April 2009. For further information, visit www.masterbuilder.org.nz.