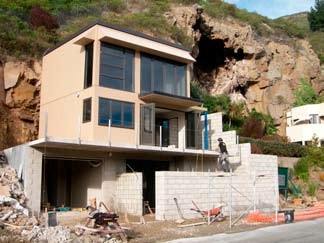 When Residential Castles Ltd managing director Karl Eastmond first saw the four by six metre section in the Sumner hills near Christchurch where a two-bedroom villa was to be built, his first thoughts were that it couldn’t be done.

Never one to turn down a challenge, Karl and the Residential Castles team decided to take on the project which would ultimately test the initiative and creativity of everyone involved. The site itself is second to none, with spectacular views out to the Pacific Ocean. However, creating a liveable space on such a small plot was a real concern. “The actual square meterage of the site was the biggest problem for us,” Mr Eastmond says. “When people initially saw the site, they asked if we were putting in a garage.”

The building itself is a two-bedroom villa spread over three levels, with the first level housing a separate bedroom, bathroom and garaging. The second level has an open plan living area with kitchen, and the third level a bedroom with ensuite bathroom.

In order to make use of what limited space it had, the team first set to removing part of the rock face to allow for a six by eight metre ground floor area. For the first level, valuable space was added by offsetting the building to the right on to existing ground, creating deck space on the left hand side. By adding a two metre deck to the front, this created a valuable six by six metre first floor open plan living area housing the lounge and kitchen areas, with large bi-folding doors onto the deck creating indoor-outdoor flow.

The upper level consists of an impressive studio bedroom with ensuite and balcony. The proposed design was incredibly tall and thin, so a unique exterior was required. Standard techniques and materials weren’t an option for the upper two levels, and the team needed to apply some lateral thinking to come up with a solution to create a rigid and durable structure.

Eventually, Eterpan — a solid fibre cladding fixed on a ventilated cavity system — was chosen as it was the only material up to the task. To maximise every inch of the extra space created, a simple approach was taken in the design, both inside and out, using sharp lines and open plan spaces.

All doors were fitted with bi-folding aluminium joinery, increasing the flow to the outside and effectively creating more liveable space. A decorative slate finish was added to the terraces, and stainless steel balustrades without handrails were used throughout, adding to the minimalist aesthetic of the project.

So far the reaction to the property has been overwhelmingly positive, with the client and the team thoroughly impressed with the end result. Mr Eastmond praised the practical initiative and flexibility of the workers on site as they rose to each challenge that the project presented to them. “Everyone involved went out of their way to create usable solutions to unusual problems. It was this kind of attitude that made the project so successful,” Mr Eastmond says.