Home Latest News Working with the best in the business 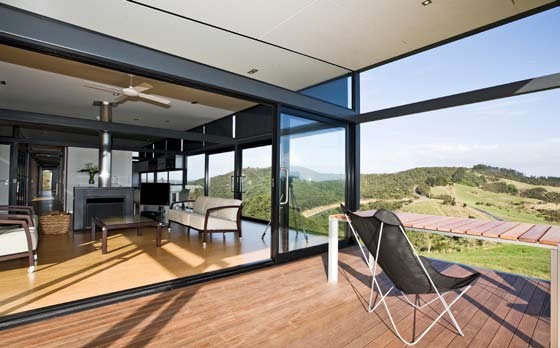 Working with one of Australasia’s most highly regarded architects was reward enough for Philip Lindesay when he took on a complex holiday home project in Russell. Taking out the Placemakers Supreme Award at the Registered Master Builders 2008 House of the Year was the icing on the cake.

Lindesay Construction, which has worked hard to build a strong reputation in the Bay of Islands since the company was established in 1987, was asked by a new client to have an initial meeting with a Sydney-based architect in Auckland.

“When they mentioned the name James Grose, I was blown away,” company owner Philip Lindesay says. “James has a fantastic reputation across Australasia, so it was very exciting to be given one of his projects.”

Te Whare Hoiho, as the home was named, was built for a Californian couple who wanted a holiday home that could be left for months at a time, and required no garden maintenance. Designed with an Australian outback feel, the house is positioned to make the most of the site’s rural and sea views. “From the outside it looks like a simple construction but, in fact, it was one of the most complex projects I have ever worked on because of the intricate steel structure. But the architect did warn us!”

Another challenging aspect of the project was adapting the complex construction specifications to meet the New Zealand Building Code, without compromising the style and design. “The home was designed to meet Australian building standards, where there aren’t earthquakes or high winds and it doesn’t rain often. The architect was adamant that the style and design shouldn’t be changed at all, which was a bit of a challenge.”

Mr Lindesay says Te Whare Hoiho was one of the most rewarding projects his team, led by Scott Sinel, has worked on, as it gave them the opportunity to work with great architectural design. “I’ve always been passionate about architecture, which is why I got into building in the first place. We are lucky to have worked with some top architects, and it’s great to now be able to add James Grose to that list.”

Other recent projects Lindesay Construction has worked on include a property at Eagles Nest Lodge in Russell designed by Simon Carnachan, the Two Rooms Art Gallery in Grey Lynn, Auckland, and many more. “After years in construction it’s hard to name a favourite project as each home has its own amazing feature — but this Russell property would come close.”