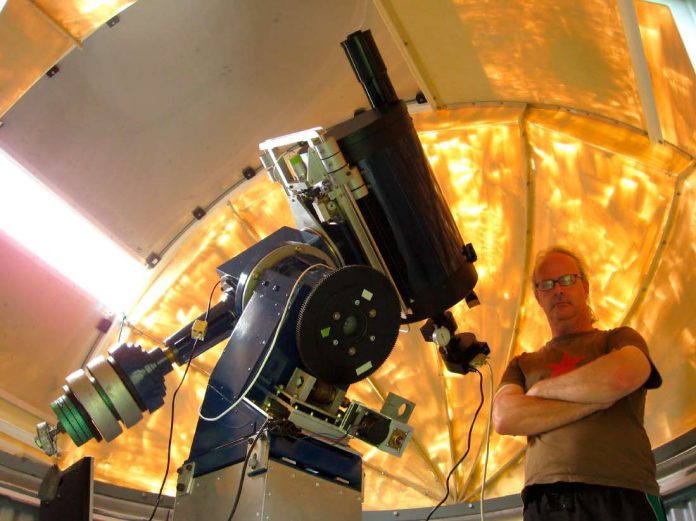 It marks the 400th anniversary of Galileo’s first use of the telescope, and recognises his revolutionary discoveries that began modern star-gazing. If you are into seeing stars, you may like to check out www.astronomy2009.org/general.

New Zealand has produced its fair share of professional astronomers over the years. But major contributions to the science are made every year by a host of backyard amateurs scattered up and down the country.

Auckland, alone, has the biggest astronomical society in the Southern Hemisphere. It must be something in the water.
The gear these folk use is impressive. Size matters. And size comes neither cheap nor ever big enough. All star gazers appear to suffer from something called aperture envy.
And this gear needs a good home. The Resource Management Act notwithstanding, modified garden sheds and custom-built observatories are not uncommon in both town and country.

Last year one starry-eyed enthusiast, Marc Bos, completed the construction of a backyard observatory literally from the ground up.
He recorded all the stages in this do-it-yourself exercise, and it seemed highly appropriate to welcome the IYA with a step-by-step progression of Marc’s magnificent creation — aka Mount Molehill.

Central to any observatory is an isolated, rock-solid plinth or pedestal on which the telescope is mounted. At no stage can it make contact with any other part of the building. The isolation minimises any vibrations except those that arrive though the ground. And this is where it started for Marc: Dig a hole. Fill it with Readymix. Build up a stack of blocks. Fill them with more concrete.

Next comes a perimeter of tanalised poles set at the points of an octagon. These are laced together with solid floor joists, and covered with construction ply and tread-plate. A rolled-steel wall frame doubles as support for the dome and is clad with good old galvanised corrugated iron. The emphasis is on strength and weathertightness, plus minimal vibration.

The dome of an observatory is its characteristic feature. It has a sliding door to allow a clear view of the heavens. And the dome needs to be able to rotate so the telescope can point to any part of the sky.

Commercial domes are available but Do-It-Yerselfer Marc built his own, starting with design and construction of a sectional mould from which he cast 12 identical fibreglass hemisphere segments.

After cleaning up, these were bolted together on a rolled-steel frame into which made-to-measure stainless sky doors were slipped. Astro Mates were called in to remove the whole kit-and-caboodle from the garage floor and hoist aloft on the clad frame.

The building was now finished off, powered up and secured. The Astro Mates returned to help with installation of Marc’s 100kg telescope on its central plinth, complete with its substantial, home-engineered equatorial mount.

For the uninitiated, this is the gizmo that enables an astronomer to keep a star centred in their ’scope during the hours the Earth rotates beneath the night sky. It is a tricky bit of engineering — unless you are Marc.

On January 1 the International Year of Astronomy dawned. Its motto is, “The Universe, Yours to Discover”. Can we suggest you take the kids and/or grandkids out to the country one evening, away from the city lights.

Do it while the nights are still warm and cloud-free. Toss a rug on the grass or sand and gaze up at the heavens. Find the Southern Cross. Show them our galaxy stretching across the dark sky as a great river of stars. Shucks, you might inspire one to become another Kiwi astronomer!