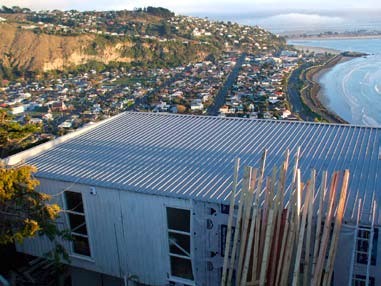 The Scarborough Hill area in Canterbury’s Sumner Hills seems to be fruitful ground for innovative eye-catching projects, and the latest addition to the area certainly doesn’t disappoint.

Registered Master Builder Parsons Construction Ltd is behind a huge project which started in December 2006 and is equal parts alteration, addition and restoration. Once completed, the build will include an entire new wing, art gallery, extensive garaging and an in-ground pool running the length of this massive residential home.

The original house is a fine example of early 50s architecture, so it was imperative for director Nick Parsons and the team to keep the original features while incorporating the new. The most unique aspect of the original design also provided the team its biggest challenge. The home rests on a distinctive bridge construction frame comprising four legs on diagonal steel beams, all perched on the steep Sumner Hills.

“Basically it’s a pole house taken one step further, and its steel design makes it completely unique in New Zealand,” Mr Parsons says. While having incredible sea views, the proximity to the ocean has taken its toll on the original steel construction, with many of the windows completely seized up and some of the larger poles in the frame beginning to bend, leaving the whole house uneven and structurally unsound.

This meant that Mr Parsons and the team had to ensure the house stayed standing while it was being levelled — not an easy task, given the house’s precarious location. However, the team’s challenges didn’t end there. While attempting to create structural integrity with updated materials it was also imperative that the character of the original steel was maintained, along with the architect’s original design of the bridge construction and original windows.

This turned out to be a bigger task than they imagined. “We tried to source people to fix them but no one was interested,” Mr Parsons says. “In the end we had to do it ourselves, working from the architect’s original designs.”

This do-it-yourself attitude epitomised the dedication of the team as they pulled out all the stops to have the project completed by December 2008. As far as response to the house goes, Mr Parsons admits that the design isn’t everyone’s cup of tea.

“Initially some people said, ‘why not just build a new house?’. But once people started to see the unique quality of the home being brought back to life they were actually pleasantly surprised. “We are immensely proud of what we’ve achieved and excited to see the finished result.”