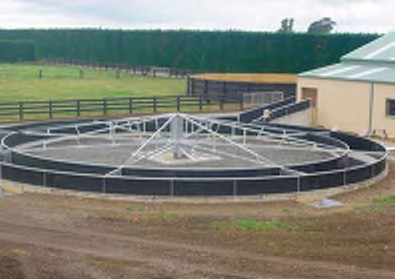 The Canterbury region certainly has its fair share of interesting building projects, but nothing compares with the latest job completed by Waikuku Beach-based Registered Master Builder McKenzie Builders Ltd, in August last year.

Brian and Leslie Court, of Westfield Farm in Prebbleton, commissioned Louie McKenzie and his team to build an innovative stable designed to comfortably house 12 thoroughbreds in one of the most cutting-edge training facilities seen in New Zealand.

The facility includes 12 horse boxes with rubberised heated floors, a tack room, washroom area and offices. All internal walls are made of tilt panel which was poured on site. In addition to all of these features, the McKenzie crew also built a pit to house a high-speed treadmill.

Every aspect of the specifications for this building tested the ingenuity of the crew, with attention to detail an integral part of the design, making this a truly state-of-the-art facility. However, what really made this project a New Zealand first and also provided the biggest challenge for the McKenzie Builders team was the “aqua walker”, an underwater treadmill that provides a safe, low impact form of training while the horses are submerged in water up to their bellies.

A current is formed with underwater jets, providing varying levels of resistance training for the thoroughbreds. In effect, the walker is a circular pool with a clothesline like structure forming an inner and outer ring of curved tilted panels, formed in steel moulds on site then water-proofed and rubberised.

The alignment of these two rings was integral to the unit functioning correctly, and it was this that provided the biggest potential headaches for the McKenzie team. “Calculating the circumference of the inner and outer rings and the exact curvature of the 17 panels that made up the outside ring was vital. If the moulds were out a fraction the circle would never have joined up,” Mr McKenzie says.

The team also had the added problem of only one mould for the inner and exterior ring. This meant that the panels had to be poured very early in the process. As time was an issue, the crew used 40Mpa concrete, enabling them to remove the panels from the mould in only two days.

Now that the project is complete, Louie and the McKenzie builders crew feel incredibly happy to have been a part of something that was not only unique to New Zealand, but also a huge test of their abilities.

It also helps to see positive results come from their efforts, with the horses responding well in their new facility and training centre. “The walker and the stables have generated great feedback from all quarters, and there’s been a lot of interest from other stables now wanting to install a walker as well,” Mr McKenzie says. “This has been a great success for us and our client, and we’re extremely proud of the end result.”