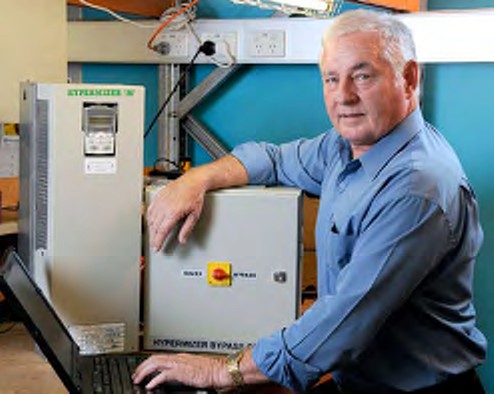 Companies that use large amounts of electricity can slash their energy consumption by 15 to 30% and significantly reduce their carbon footprint with a new technology launched in Australia recently.

Warren Ingerson, managing director of Satel Pty Ltd, the Australian distributor of Hypermizer, says the product is the only one of its kind in the world that can deliver such significant power savings.

He says traditional energy-saving equipment already on the market is considerably less effective than the Hypermizer system. “With the increasing cost of electricity and the impending tax on carbon emissions, this technology represents an opportunity for energy-heavy companies to make significant bottom-line savings,” Mr Ingerson says.

The Hypermizer System is a combination of power controller and software that improves the performance of electrical equipment by stabilising the volatility of electricity supply, thereby reducing consumption, wastage and costs.

It also prevents spikes and surges in power, improves load efficiency and reduces heat associated with electrical loads, thereby extending the life of electrical equipment. Mr Ingerson says while the Hypermizer system can be adapted to virtually any commercial power system, it is particularly useful for businesses that use large amounts of energy, such as hotels, hospitals, shopping centres, manufacturers, airports and supermarkets.

It can also generate substantial cost savings for mining operations, street lighting, schools, libraries and office blocks. The technology has already been successfully installed in nine countries around the world, and is now available in Australia. Highly impressed

“Australian businesses involved in pre-launch testing of the Hypermizer — including a major supermarket chain and a major hotel group — have been highly impressed with the substantial electricity savings the product has generated. “With the price of electricity high, and likely to go much higher as a result of carbon trading arrangements, this is one area where energy-hungry companies can make significant savings very quickly.”

In addition to taking costs straight off the bottom line, Hypermizer will produce substantial improvements in energy efficiency, which Australian companies are now required to audit and publicly report on each year under the Energy Efficiencies Opportunities legislation.

“To ensure customers get a complete understanding of the benefits of the Hypermizer system to their business, we first conduct our own audit of energy usage to determine exactly what the anticipated costs savings are likely to be,” Mr Ingerson says.

The Hypermizer system has at least a 10 year life span and is priced to break even after just two to three years. The technology has been proven to be reliable and stable, and is backed by world-class quality testing and certification. All units are manufactured in line with ISO 14000 environmental management standards to ensure a minimal environmental impact.