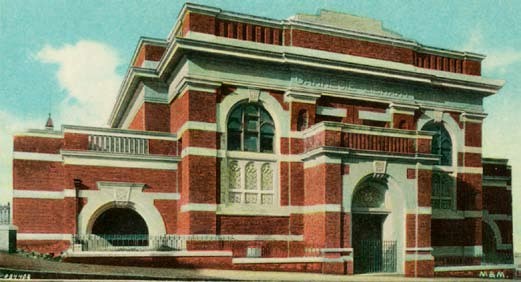 Of the 18 libraries gifted to New Zealand by the late Andrew Carnegie, the most lavish was that of the City Of Dunedin. It was also one of the more controversial. Perhaps Scots-born Carnegie had a soft spot for the Edinburgh-of-the-South, as he donated £10,000 towards its library in 1902. The next greatest amount scored in New Zealand was the £3000 that went to Timaru.

Early Dunedin had a library by 1859. It arrived via a route common in the new colony — the local Mechanics Institute and Athenaeum Society. The frugal Dunedin City councillors were not ones to be rushed into spending rates on a public library. The Public Library Act came and went in 1869 and not the slightest interest was shown in the south to act upon it, unlike in all major European centres to the north.

In 1890 a group of concerned citizens formed a lobby group, the Dunedin Public Library Association. However, a public vote in 1891 for a dedicated library rate was lost by 942 to 843. The Diamond Jubilee of 1897 provided the Association with an excuse to press its case. They approached Andrew Carnegie who offered his £10,000, provided the council guaranteed to contribute £700 per annum.

Importantly, as with all Carnegie’s library bequests, the council had to guarantee the new concern would be established forever and a day as a free library. The Association’s success left the Dunedin Council gobsmacked. They remained lost for words for some months. When they did go public, they announced that they would not be taking any action until they had written to Carnegie and had him explain the precise meaning of the word “free” when juxtaposed alongside the word “library”.

Other matters the council wanted clarified were: • did all the £10,000 have to be spent on a library, as they felt you could get a library plus a museum for such a sum, • could they not charge for lending to ensure replacement books could be purchased?, and • did they really have to manage the library?

Carnegie’s answers were a polite but terse: “Yes”, “No”, “Yes”. The council had to comply precisely with the terms of the original offer if they were to get any money. The canny burghers of Dunedin had no intention of letting £10,000 slip through their fingers. They accepted the money and all its conditions.

When it came to choosing a site, the Public Library Association was again to the fore. They lobbied successfully to have the library become part of a planned municipal precinct with a frontage on Moray Place.

A nationwide competition was run for suitable plans. Twenty entries were received, with the winner Crichton & McKay from Wellington. A tender for construction was let in June 1906 for £9085. As with all Carnegie’s New Zealand libraries, Dunedin’s building was one of substance in concrete, stone and brick. Shoddy constructions were abhorred by the philanthropist.

All plans and specifications had to be vetted by his staff before construction commenced. He hated waste space, such as foyers. His ideal was to ensure “the utmost amount of effectiv [sic] accommodation”. The Dunedin building emulates this approach.

The local Athenaeum Society refused to have anything to do with any public library. They declined to surrender their books. And so it came to pass that when W B McEwan of Stirling, Scotland, took up his appointment as librarian on 27 May 1908, he found himself in possession of a shell containing no staff, no fittings and no books.

On the library’s 21st birthday in 1929, the Otago Witness recollected how the Town Clerk had taken McEwan to the new building on his first day, turned the key in the lock, swung the door open and said: “Here is the library. For God’s sake, tell us what to do with it.”

McEwan set to from scratch. On 2 December 1908 he opened the reading room, with the library proper letting in the public on 22 November 1909. He had few books, and a lending service did not get under way until 1911, thanks to a donation of 3000 volumes from the Caversham Library Committee. Nonetheless, McEwan managed to turn it all around, and when he retired in 1933, more than 330,000 loans had been serviced in the previous 12 months.

It was McEwan who trained the redoubtable Miss Culverwell who was appointed chief librarian of Timaru’s Carnegie Library in 1913, the first woman to gain a senior appointment in a male-dominated area. Her appointment ahead of 112 other applicants was sufficient a rarity to earn comment in the monthly American Library journal, while the Timaru Post was agog. It editorialised on the matter, reporting that, “people in the street” were concerned how the selection of a woman was preventing a married man with a family from obtaining a living.