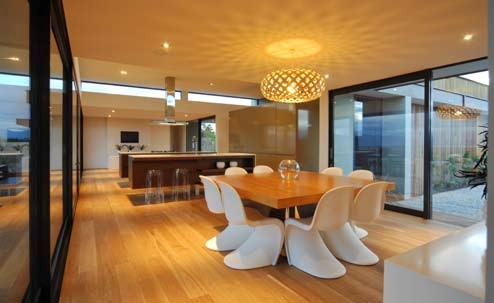 Carlton Richards Architectural Building’s stunning design and build of a property in Harakeke, Nelson, was the well deserving winner of two national awards in the Registered Master Builders 2008 House of the Year, in association with PlaceMakers.

Winning the national Meridian Sustainable Homes $500,000 – $1 million category and the national Heart of the Home Kitchen award was a great way to gain market exposure and credibility, owner/operator Carlton Richards says. “When you win an award like this it’s the equivalent of being at the top of the class, essentially like achieving an A+,” Mr Richards says.

Carlton Richards Architectural Building was approached by clients who requested a Modform sustainable and contemporary design for their new home, which would also be sympathetic to the location. The finished result was highly regarded by House of the Year judges who were particularly impressed with the thorough approach the builder took to the home’s sustainability.

“The builder really took sustainability to another level. Every detail has been thought through in terms of its effect on the environment, and how it impacted the cost of the project. Even the overall design approach complements the home’s sustainability,” national competition judge Guy Evans says.

Mr Richards first got involved in the House of the Year competition in 2005 with his previous building company, when he won seven out of eight regional awards in Nelson, and three national awards.

He largely attributes his business and competition success to a skilled team of positive, enthusiastic people. “The hardest challenge in the construction industry is finding the right people to do the job. It’s about having good carpenters on site and ensuring attention to detail. You really want to do it once and do it accurately.”

Mr Richards has been working in the construction industry for about 30 years, and says he knew it was what he wanted to do from an early age. “The construction and engineering of things has always fascinated me. As a teenager I helped renovate the family home, which gave me a good insight into what building is all about early on.”

Mr Richards Architectural Building is one of the three companies owned and operated by Carlton Richards which specialises in design, Q/S drafting and construction. spazioCasa, another of his companies, is an interior fitout retailing outlet.

Mr Richards developed these companies to create a point of difference, separating the business into construction, architectural design and bathroom design. “With these companies (Modform, Carlton Richards Architectural Building and spazioCasa), we have worked to develop a holistic brand based on quality construction and impeccable design capabilities.

“We have really championed the benefits of beautifully crafted homes, promoted our award-winning designs and focused on good customer service to achieve success.” Mr Richards has recently opened his premium bathroom company spazioCasa, specialising in luxury designs and spectacular products. He explains that although he prides himself on offering top-of-the-line services, his companies always work with a value-for-money mindset. “It has to work for both parties. We like to have a fair outlook with our clients — it always works best when both sides are getting a good deal.”

Mr Richards has developed a strong reputation over the years, something he says is the result of hard work and always aiming higher. “In these economic times it’s all about having a positive attitude and being creative. If we aren’t creative as a small country we won’t be able to establish an international presence.

“You need to be 100% passionate about the business all the time. Maybe in the high times companies can get through by not giving it their all, but in the low times they’ll be on the scrap heap. “Never rest on your laurels — you always have to work hard to get better.”