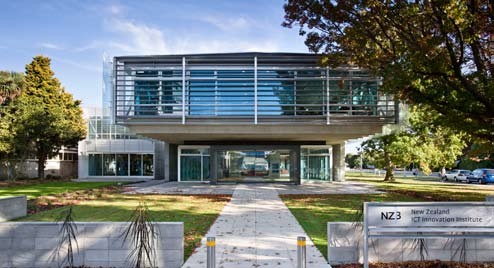 A key focus for Canterbury University was that their innovative new building — which houses the university’s School of Engineering and the national ICT (information and communication technology) Innovation Institute known as NZi3 — would embody a high standard of environmentally-sustainable design.

However the design and construction team faced not only the future-proofing requirements, but several other challenges as well. Two years after the university put the project out for tender, the NZi3 building stands tall, featuring several well considered solutions to these challenges, as well as a striking appearance.

The lead design consultant was Warren and Mahoney Architects, and the main contractor was Hawkins Construction. Located on the corner of Engineering Road and Creyke Road, the 70m long, 16m wide building measures 2400sq m over two levels. The upper level links to level two of the building that houses the mechanical engineering wing of the university’s engineering faculty.

Mr Govind explains the background to the building. “The Government recently identified ICT as one of three growth areas with the potential to make the greatest positive impact on the New Zealand economy. “Embracing this challenge, the University of Canterbury proposed the construction of a facility to be the first dedicated ICT Research Centre in New Zealand, and a National Centre of Excellence for Research and Training in ICT.” Inventiveness and creativity

He says the building is a prominent feature on the campus and an iconic statement that conveys NZi3’s aim to be the bridge between industry and academia, and the spirit of innovation. “The idea was for it to provide high-quality internal space that would foster and stimulate inventiveness and creativity,” Mr Govind says. “The building services had to replicate this ideal with a sustainable, energy efficient and environmentally-friendly design that would also help stimulate questioning minds with its aesthetic visual appearance.” Future-proofed excellence

According to Mr Govind, the client also wanted the building to set new benchmarks in flexibility and environmental performance. The team designed it to achieve a five-star Green Star rating, which it achieved with a strong 66 points. The project is part of a pilot scheme to establish a green star rating for education buildings in New Zealand.

Beca made extensive use of 3D computer simulation analysis to target the design to specification and consider thermal comfort modelling and annual energy and water use. The building incorporates several cutting-edge, future-proofing features. Mr Barbour is proud it became the first commercial building in New Zealand to use phase change materials (PCM), in the form of ceilings.

Imported from Germany, the lightweight PCM materials are capable of storing or releasing large amounts of energy, and enable significant energy savings. He says the use of PCMs in New Zealand is “ . . . revolutionary and cutting edge. NZi3 is all about innovation, and the application of PCMs is an excellent example of advanced building design”.

He explains at room temperature PCMs are solid. When it becomes warmer, they liquefy and absorb heat. This cools a room. Conversely, when the temperature drops, they solidify and emit heat which warms the room. “PCMs actively manage room temperature by absorbing heat gains during the day and dissipating the heat to the interior at night, reducing the need for peak cooling demand and the associated energy consumption,” he says.

Mr Govind says the iconic structural solution was critical to the project to provide the large free flowing open spaces on both levels and to achieve a form in keeping with the architect’s overall vision — Bridging Academia with the Industry. “A notable feature of the building is that the aesthetic derives from a deliberate expression of the primary structural elements supporting the upper level,” he says.

The deceptively simple structural system allows for a column-free construction and a building interior largely devoid of structure, to allow flexibility for space planning. It consists of a pair of 72m long trusses that run the full length of the upper storey and support the roof and first floor suspended floor system.

A single cruciform column is located midway along each longitudinal truss. Mr Govind says in contrast to the deliberately massive concrete walls that anchor the structure, these columns appear very slender.

“This is possible due to the reduction in axial load at midspan, the result of the compensating effect of the large cantilevers at either end of the building,” he explains. Stevenson Structural Engineering Ltd from Tokomaru did the steel fabrication and erection work, using 650 tonnes of steel. Each truss was fabricated in four principal 18m-long subassemblies to facilitate transportation to site.

There, the Stevenson team erected and connected the subassemblies in situ, using site welds to ensure a homogeneous appearance. The longitudinal truss chords and vertical web members are fabricated three-plate I sections. The diagonal web members are standard UC sections.

The suspended first floor system consists of precast concrete tees with an in situ topping, spanning the full 16m width of the building. The tees incorporate an embedded RHS member at their ends to achieve the connection to the bottom flange of the trusses.

Extensive glazing on the ground floor gives the appearance the upper structure is floating above a transparent pavilion. Locating the custom steel brackets that support the ground floor glazing well back from the glazing line helped achieve this effect.

On the upper floor, the main glazing line is located inboard from the longitudinal trusses. A secondary façade built with fritted glass and supported by bespoke steel outrigger frames provides solar screening.

The site presented a robust challenge for this type of structure. Sandy gravels with a shallow layer of silt containing organic compounds at the surface underlay it. The water table is shallow, at approximately one metre below the ground surface.

Consequently, the foundations of the building are on 900mm diameter bored piles located under main structural elements such as the in situ reinforced concrete shear wall and precast tilt-up panels.

To minimise the effect of differential settlement, reinforced concrete ground beams linking the pad foundations were provided in places. The ground slab overlays high density polystyrene block for thermal insulation, and the team was careful with the detailed work to prevent cold bridging effects.

Mr Govind says in addition to the usual strength design considerations, more complex serviceability issues and secondary effects such as shrinkage of the concrete floor, differential temperature in the truss top and bottom chord, deflection of the substantial cantilevers, and vibration performance of the first floor all required the design team’s particular attention.

“Close collaboration between Beca and the architects during the early parts of the design resulted in a structure that’s integrated with the architectural as well as functional requirements. “The completed building offers a visually impressive and modern centre of learning for the university — worthy of the five stars it earned. “In addition, the construction of the building required seamless coordination — the NZi3 teams did well,” Mr Govind says.