Home Latest News Luck has nothing to do with it 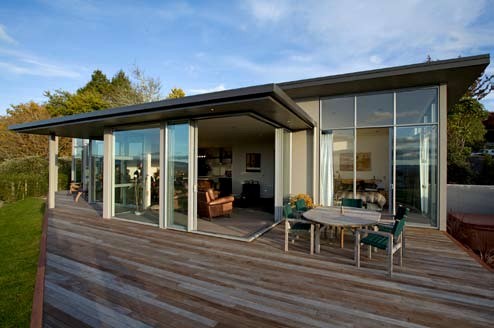 Taking out the national New Homes $350,000 – $450,000 category in the Registered Master Builders 2008 House of the Year, in association with PlaceMakers, was a special achievement for Glencoe Construction.

It was the second year running Glencoe Construction had taken out a national title in the competition, following on from their New Homes $250,000 – $350,000 win in 2007. Bob Wheeler, owner and operator of Glencoe Construction, was rapt with the company’s success. “It’s really special to win a national title two years in a row. We consider it a massive accomplishment,” he says.

The winning property, a Rotorua home, was built on what Bob considers a “tremendous” site overlooking Lake Rotorua and a nearby reserve. Mr Wheeler knew the home owners from a commercial project he’d previously worked on. They came back to Glencoe Construction with two requests — to renovate their existing home and to build a new house at the back of their property, which they were subdividing.

“I’d obviously done something right the first time because they came straight back when they decided to build their new home,” Mr Wheeler says. Glencoe Construction designs and builds homes, something which Mr Wheeler feels gives them an edge in a competitive marketplace. “It’s great to be able to tell a prospective client we can take them from start to finish. We also do renovations and commercial projects — pretty much everything. Rotorua is too small for us to be a one-trick pony.”

He says the new mono-pitch home was built exactly to the plan Glencoe Construction had developed, and featured extensive use of glass to maximise the site’s stunning vistas. “The bedrooms and living rooms are all situated on the reserve side of the property which is almost all glass, so they all get the wonderful view and lots of sun,” Mr Wheeler says. While the past year has undoubtedly been tough for all builders, he says Glencoe has stayed relatively busy, and have a number of interesting projects on their books for the coming year.

“I think our success in the competition is really starting to pay dividends. We received a lot of referrals after both wins, and I think there is a real perception in the marketplace that we can deliver top quality work, which is fantastic.”  Glencoe Construction does little formal marketing, and lets their entries in the House of the Year and word of mouth do this for them.

“It’s interesting because we don’t really do much advertising, and we certainly haven’t done any more in recent times yet we are still quite busy. That’s got to be a good sign.”  This year the Glencoe Construction team has four entries in the competition, including a Nulook Builder’s Own Home entry which Mr Wheeler frankly says is “no more special than any other home I’ve worked on”.

Are they hoping for success the third time around? “Of course we’d love to take home another national title, but there is no denying the competition will be tough. It will all come down to the quality of our builds, something which I am sure is up to scratch.”