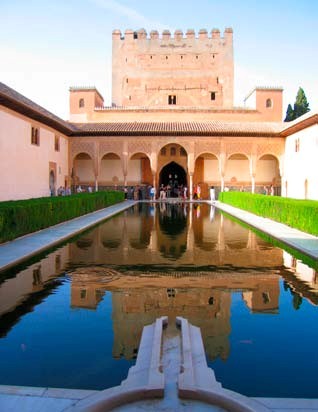 Given the Middle-eastern tensions that bedevil the world today, we may sometimes forget that for eight centuries Spain was an Islamic nation. The dominant Moors have left the world a rich heritage. Right at the top of the list is the remarkable fortress-cum-palace combo that dominates Granada. If you ever make it to this part of the world, join the rest of the tourists and take in one of the world’s great architectural wonders.

The Alhambra sits astride a hilly terrace measuring about 740m x 205m, south-east of Granada. On the western side is the original strongly fortified citadel. The present name comes from the Arabic meaning “red fortress”, in reference to the red clay used in its construction — although, originally, the buildings were whitewashed.

Elsewhere on the plateau, within a fortified wall graced with 13 towers, are a number of palaces. These include the Palace of Charles V, Holy Roman Emperor in 1527. The result is a remarkable blend of Islamic and Christian architecture.

The main Islamic phase of building was completed towards the end of Muslim rule in Spain in the mid-to-late 14th Century during the reigns of Yusuf I and Muhammed V. This is a time when Muslim artists and intellectuals took refuge in Granada as the Christian armies won territory.

When Moorish sultan Ibn Nasr retreated to Granada he decided to give the Alhambra a total makeover. He ordered his architects to not only strengthen and enlarge the citadel but include plans for six palaces to form a royal quarter, two circuit towers and numerous bathhouses.

Over the next few reigns the terraced hill summit was transformed into a palatine city, complete with an irrigation system. Previously, the Alhambra had depended upon rainwater collected from a cistern. The creation of the Sultan’s canal turned the complex into a palace-city rather than a defensive and austere structure.

The palace decorations typify the climax of Moorish influence in Spain and, in particular, of Andalusian art in Granada. Muslims in Spain were, to some extent, isolated from the rest of Islam, and were also influenced by their contacts with Christian Europe. There is scant hint of the Byzantine influences seen in the Muslim east. Those 14th Century tessellated tiles would provide Escher with thought-provoking inspiration when he paid a visit 500 years later.

Granada and Alhambra were finally lost by the Muslims in 1492 to the forces of King Ferdinand II of Aragon and Queen Isabella of Castile. The Christian victors and their heirs promptly set about making changes and generally vandalising the entire site. Decorations and paintings were stripped or badly damaged.

Then in the mid-16th Century, Charles V rebuilt portions in the Renaissance style and destroyed the greater part of the winter palace, simply to make way for a new structure that he never completed. Come the 18th Century, and Philip V Italianised rooms and built a further new palace in the midst of the Moorish buildings.

And the French chimed in in 1812 with their one ‘n’ tuppence worth. They pulled down some towers before Napoleon tried to blow up the entire complex. It was saved only by a remarkable soldier who defied his commander and defused the explosives.

Restoration began in 1828 under the orders of Ferdinand VII and the hand of architect José Contreras. Today the Alhambra comprises gardens, fountains, streams, a palace and a mosque, all within that fortress wall flanked by 13 massive towers. Contreras has, to a great extent, achieved a reflection of the beauty of Paradise that the Red Fort was once intended to provide.