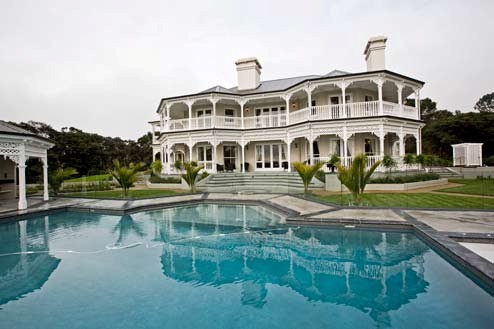 P.W Design and Build’s stunning rendition of a 19th Century mansion was the deserving winner of the New Homes over $1 million category in the Registered Master Builders 2008 House of the Year, in association with PlaceMakers.

P.W Design owner/operator Paul Williams says it took just under two years to complete the stunning property. “With a project of this magnitude there are always going to be challenges,” Mr Williams says. “The woodwork and intricate detailing was time consuming, but with a bit of kiwi ingenuity we got a great end result.”

The stately property was modelled on Governor Sir George Grey’s 19th Century home on Kawau Island, a design that impressed the competition’s judges. “The builder has painstakingly crafted many of the aesthetic details — from the battened ceiling to the exterior fretwork, posts and veranda — all of which mimic the ornate feel of the period in which the original property was built,” competition judge Guy Evans says. “It will stand proud for the next 100 years.”

Mr Williams says the project commanded great patience, careful planning and close on-site supervision. “The key to success is based on strong links between three parties — the client, architect and the builder. It’s a team effort so if everyone has the same vision you’ll get a very successful result.”

P.W Design and Build specialises in the upper end of the market, a segment that Mr Williams believes is driven by quality and reputation. “Clients building in the higher end of the market are less likely to shop around for the cheapest price. “It’s more about personal service and providing top results, something a smaller company like P.W Design and Build is able to deliver.”

Mr Williams has always had an innate interest in the construction industry, a passion he says evolved very early on. “The ability to express creativity was what initially captured my interest in building,” Mr Williams says. “But in order to start your own company it’s really important to understand everything from marketing to account management — you need a holistic approach.”

And 44 years later, Mr Williams is still learning from those around him. “Although you can’t beat experience, it’s really important that builders stay in tune with architects and what’s happening in the market. We are always looking for new ways to improve.”