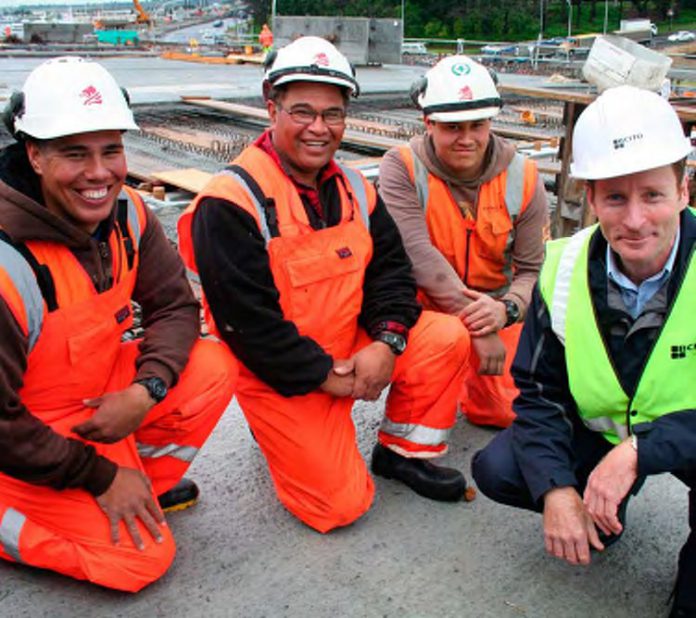 While the expression to “build a bridge” is often used in jest among families, it’s no joke for Bay of Plenty builder Ray Puhara and sons Logan and Hayden.

In fact, building a bridge is what the Puhara family of Te Puke does for a living, with Ray, Logan and Hayden all currently working on various aspects of the construction of the Harbour Link bridge, a project designed to provide more efficient access between Tauranga and Mount Maunganui.

Ray runs his own residential and light commercial construction business, Build 4 U, and employs two other staff members, including 23-year-old son Logan, who has just completed his National Certificate in Carpentry, through the Building and Construction Industry Training Organisation (BCITO).

When Build 4 U was offered a contract through Fletcher Construction last year to work on the $255 million Harbour Link project, Ray and the team jumped at the chance to try something different and to work on one of the largest transport projects ever constructed in New Zealand.

One of the reasons Ray’s team was able to take advantage of this opportunity is that his talented team of builders is very well trained – all holding qualifications in the construction industry. Passion for training

A passion for training has been instilled in Ray ever since he began his own apprenticeship in carpentry and joinery after leaving school, knowing that it was the first step to running his own business in the future.

Back then, this involved going through the old apprenticeship system, which required apprentices to complete 10,000 hours of training. “It seemed like a long time to be doing an apprenticeship, but knowing the skills learned would set me up for life was what motivated me to get through,” Ray says.

These days, Ray’s apprentices, like Logan, complete competency-based BCITO National Certificates. “Now that construction apprenticeships are competency-based, it’s about proving your ability and understanding, which is a much better system. However, you never stop learning — I have just completed an adult assessing course with the BCITO,” Ray says.

Logan began his BCITO National Certificate in Carpentry having previously completed a painting apprenticeship. Having been immersed in the construction industry all his life, Logan was able to prove his skills and abilities very quickly, and he completed his BCITO carpentry apprenticeship in two years. “While contracting to Fletchers, it has been recognised that Logan is a well trained and very focused young man who will go a long way in the construction industry,” Logan’s BCITO training advisor Don Campbell says. Ideal candidate

“His qualifications and experience make him an ideal candidate for a position as a leading hand.” The youngest of the Puharas, 17-year-old Hayden, has also followed his father Ray and brother Logan into the construction industry. Employed by Fletcher Construction, he is currently working through two National Certificates in Concrete Construction — Siteworks and Pre-cast.

All three of the Puharas have found BCITO National Certificate programmes to be the stress-free way to achieve internationally-recognised qualifications. “The BCITO training advisors make it extremely user-friendly to prove the competency required,” Ray says. Important first step

Both the boys agree, and add that achieving their National Certificates is the important first step in their construction careers. Completing BCITO qualifications has allowed them to choose a great career at the same time as enjoying an active lifestyle in the Bay of Plenty, where Logan and Hayden enjoy drifting at Merimeri and Taupo, and surfing at the Mount.

The BCITO is the organisation appointed by the Government to develop and implement industry qualifications for the construction sector. The BCITO is the standard-setting body for the following sectors within the construction industry: carpentry, cement and concrete, floor and wall tiling, frame and truss manufacturing, interior systems, proprietary plaster cladding systems and solid plastering.