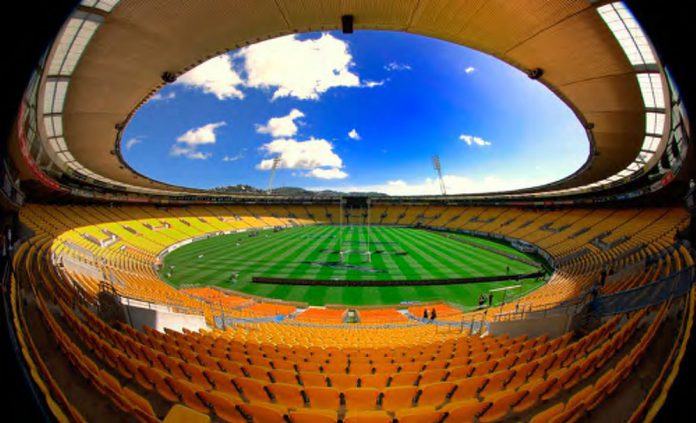 Like some latter day philanderer, Wellington seems to have gotten over its long-professed, 103-year love affair with Athletic Park. It did so in quite unseemly haste. In 10 short years The Westpac Stadium, aka The Cake Tin, aka The Ring of Fire, has absolutely positively claimed the capital’s heart.

On 3 January 2010, city and stadium will celebrate 10 inseparable years. In many ways the stadium has more than achieved its primary goal of providing a multi-purpose venue of international quality at a central location.

Ground for the new venue was broken on reclaimed railway land back on 12 March 1998, with the stadium opening on 3 January 2000. The final construction bill came in at $130 million.
The principal contractor was Fletcher Construction, with the project managed by Beca Carter Hollings & Ferner. The architects were Warren & Mahoney, and the owner and operator is the

Wellington Regional Stadium Trust.The stadium now provides the home for the Air New Zealand Cup Wellington Lions, the Super 14 Hurricanes and the A-League Wellington Phoenix FC.
It acts as New Zealand host for the New Zealand leg of the International Sevens. And today, of course, it is also home to the Ranfurly Shield.

Notable, one-off events have included:
• the first ever Edinburgh Military Tattoo to be conducted outside of Edinburgh, in 2000,
• the conclusion of the Australasian leg of The Rolling Stones’ A Bigger Bang World Tour in 2006,

• the memorable greatest-ever loss by the New Zealand rugby league team: 58 zip on 14 October 2007 (we won’t even consider mentioning the winners on that day, Ed),
• the largest-ever football crowd in New Zealand of 31,853, when the Wellington Phoenix FC played David Beckham’s LA Galaxy on 1 December 2007, and
• Film director Peter Jackson encouraging 30,000 cricket fans to chant in Black Speech in order to obtain the sound bite for the Uruk-hai’s war cry during the Battle of Helm’s Deep.

The pitch is mowed daily and watered every second day.