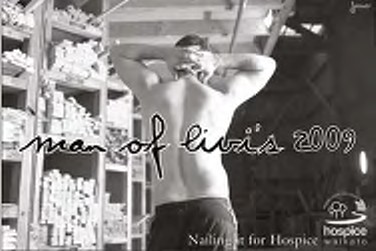 Waikato Registered Master Builder company, Livingstone, was established in 1947 and is well known for its “Excellence in Construction” throughout the region.

Recently, the company branched away from its core skills in construction and into the unknown realm of modelling to raise money for Hospice Waikato — and had a lot of fun along the way. ‘Men of Livi’

The idea for a “Men of Livi” calendar showing builders posing in their work gear was mooted by Jayne Brazendale, executive assistant at Livingstone a few years ago. But it was put on the back burner.

“A couple of years ago, I raised it with management again and they agreed to resurrect my idea,” Ms Brazendale says. “So I got to work on finding a photographer and printer who provided their services free of charge, and approached our foremen to pose for it.” She had no trouble getting buy-in from photographer Craig Brown, and their printer Rosetown Print jumped at the chance.

“PlaceMakers also provided their warehouse for the photo shoot which was really useful considering it was raining cats and dogs at the second shoot,” Ms Brazendale says. Wolf whistling

“The ladies at PlaceMakers didn’t get much work done that day, wolf whistling at our boys posing, while the guys had a good laugh. It was lots of fun with heaps of laughs.” The main problem she had was getting the foremen to agree to pose in the first place.

“They all went shy,” she says. “In the end a couple of our carpenters agreed to do it too. However, we were still a month short so two of the guys who were already modelling offered to do it — so we had a double act for December.”

The guys were fantastic sports, and most of them stripped to the waist for the calendar. One even went a little further! “It’s been a huge success. We raised $1169 for the cause. Hospice Waikato chief executive Elizabeth Bang was over the moon when I handed the cheque over. “The boys still get a kick out of it when they’re recognised in the street. You’d think they were celebrities — I guess they’re ‘good sport’ celebrities.”

Ms Brazendale says they’d love to do it all again next year, this time using the girls from Livingstone instead — with their tops on of course! Nice work Livingstone — it’s great to see Registered Master Builders doing their bit for charity — and obviously having a great deal of fun doing it at the same time!