Home Apprenticeships Tested in more ways than one 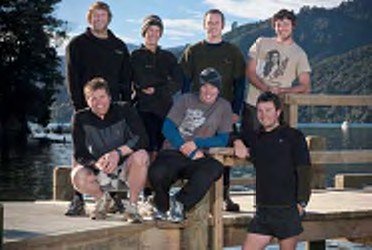 Waikato 2008 Apprentice of the Year Greg Thomson says the mental challenges were definitely the most testing part of his Outward Bound experience.

Greg, who works for Linmar Construction Ltd, attended the Outward Bound programme in September of this year. He says the 21-day programme was action packed.

It included a separate two and three-day tramp, a two-day kayak trip and a three-day sailing trip, along with rock climbing, a high ropes course, and a three-day bush solo — “it was full on”, Greg says.

He added that doing the course with a group of other tradespeople worked well as they were all like-minded and were keen to get a lot out of it. Despite the high fitness level of the group, the programme was still very challenging for them.

“Everyone had their own moments. For me it was the first day of sailing following a number of days of kayaking. We had been rowing for five hours and, admittedly, I was pretty fed up. I realised then that the mental challenge was greater than the physical task,” he says.

It was that mental challenge that Greg thrived on, and cites as one of his favourite elements of the course.

“I really did enjoy the mental challenge — having the opportunity to push yourself, really turning up the dial. It’s great,” he says.

When asked what he and other “watch” members took away from the programme, Greg listed a number of things.

“You learn how to give and take constructive criticism and how to treat people better, but one of the best things I took away was the friends I made.

“I’m good mates with a number of the guys I did Outward Bound with — it’s pretty hard not to make close bonds when you are out in the bush together for a couple of weeks!”
Greg finished his apprenticeship in December 2008 and has been running some “fairly decent”-sized jobs at Linmar Construction since then.

A record 161 carpentry apprentices from across the country entered the competition this year, 26 more than in 2008, and more than any other year since the first competition in 2004.