Home Apprenticeships RMB knows good apprentice when he sees one 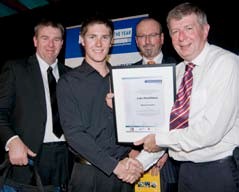 Kevin Garrity of Edinbridge Resources in Tauranga certainly knows a good apprentice when he sees one.

For the past four years one of his apprentices has had success in the Bay of Plenty Registered Master Builders Apprentice of the Year, in association with Carters. Luke MacGibbon took out this year’s competition.

Mr Garrity says Luke first started worked for Edinbridge during his school holidays in 2005. At the end of the holidays he was so impressed with Luke’s work that he offered him a full-time job.

“I like getting young guys to work for me over the holidays so I can get a feel for what they’re like,” Mr Garrity says.

“After working on our team for the summer I could tell Luke was special — he’s very intelligent and well ahead of his time.”

Mr Garrity says he made a conscious decision to hire more apprentices seven years ago when he decided the business should expand into the upper end of Tauranga’s residential market.
“Tauranga’s high-end housing wasn’t really being targeted by anyone, and I knew if we wanted to specialise in that space we would need some very capable tradesmen. There simply weren’t enough around so we decided to hire apprentices and train them up properly,” he says.

“The strategy has worked really well for us, and many of my apprentices have stayed a part of our team after completing their studies.”

Edinbridge Resources, a family business started in 1998, now builds a number of luxury homes, many of which are managed by the company’s apprentices.

“Luke has been running a $1 million build which he priced himself. I reviewed Luke’s pricing document and, because he’s so methodical and precise, I didn’t have to change a thing.”

He believes one of the great things about the market Edinbrige is in is that it means all his apprentices have learnt some of the “craft” carpentry skills that many of today’s builders don’t know.

“I try to ensure the boys get a go at everything, including traditional carpentry jobs, so they have a large skill base,” Mr Garrity says.

This also extends to some of the more administrative tasks. When one of his builders gets an injury, instead of giving them time off they learn about the tender process, business management and pricing in the office.

When asked why he has had such competent apprentices over the years he says it’s because at Edinbridge the staff get “thrown in the deep end”, but are given plenty of support as well.
“Both of my sons work for me and I have a lot of young guys on my team. Because we build high-end homes I think the guys have to learn on their feet quite often, which is good for them.

“We don’t have them out their on their own though. I team up my new apprentices with older members on my staff, and I’ve found this mentoring process works well and builds great young tradesmen.”