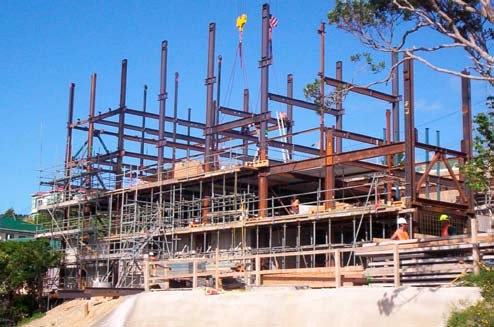 For this project, New Zealand structural engineers at Aurecon developed an advanced earthquake damage avoidance system, the first of its kind in the world.

It has now been internationally recognised by the Institution of Structural Engineers (UK) in their 2009 Structural Awards, with Aurecon (Wellington), structural designers for the project, winning “the Education or Healthcare Structure” category.

The judges commented that Te Puni was “a worthy project bringing true innovation in the field of seismic design and economy to what could have otherwise been a very expensive building”.

The major structural engineering innovations that attracted the judges’ attention are located in the building’s clever bracing systems. Conventional design of steel-framed structures for seismic events has depended on member ductility and the acceptance of a certain amount of damage to frame members.

In this new system, “connections” rather than frame members are the focal points for energy dissipation. The result is a structural design where the steel frames themselves will escape significant seismic damage.

Aurecon project leader Sean Gledhill shared his delight for the project, the talented team, and implications for New Zealand structural engineering as a whole.

It was crucial to the project’s success that there was a high level of collaboration with all involved, especially with the design-build contractor Hawkins Construction, who grasped the potential of the new technology immediately.

“This damage avoidance system was presented, reviewed and constructed whilst other technologies were still in laboratory testing phases,” Mr Gledhill says.

Steel was also crucial to the project’s success. “The Te Puni project demonstrates how steel as a material can be manipulated to form complex parts and systems without a major impact on cost or speed of a project.”

What logistical challenges set the scene for this innovation?

Three hundred and forty-eight dormitories were to be built on a steep hill in a condensed 18-month programme. The hill is 2km from a major seismic fault, and to also meet the needs of the buildings’ secondary role as the University’s disaster operations centre, it was paramount to take earthquake protection to the max.

The clever response was to invent an economic system for the complete protection of multi-storey, steel-framed buildings.

“Basically it meant taking the ideology of base isolation you’d use on a hospital project and taking it into a steel frame building,” Mr Gledhill says.

“We approached the problem in a different manner to traditional design. We considered where damage is normally allowed in a building, and brainstormed ways of protecting the primary frame.

“We used an enhanced jointing system at beam column joints as conceived by Dr Charles Clifton, when he worked at the Heavy Engineering Research Association (HERA), and created a column base protection device for frames.”

The Te Puni buildings are literally designed to “rock” — and not just in terms of being a great place to live.

The damage avoidance system involves a new form of foundation connection which allows the buildings to lift during an earthquake — then rock using railway damper technology to control movement in a controlled and safe manner.

The joints between columns are allowed to slide, absorbing seismic energy. The movement is very small, but essential.

This technology is a step change in design philosophy. Whilst being safety-compliant for earthquakes currently means “a standard that ensures people can walk out alive”, this damage avoidance technology takes it to the new level of ensuring that the building “still functions” after an emergency.

The project also takes seismic design of flexible multi-storey, steel-frame buildings in a new direction. Developers now have the option to fully protect a steel building with similar performance-to-base isolation. There are now cost effective, sustainable and original solutions with applications for developers in seismic areas all around the world.

Designing a social place, and one that is safe for as many probabilities and improbabilities as you can imagine, is part of the job for leading architects and structural designers.
The Kiwi ingenuity behind Te Puni shows that anything that can be made can be made better, smarter, safer.