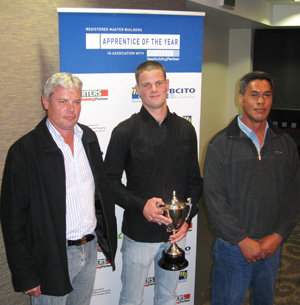 
The recipient of the award was Alex van de Wetering, employed by Livingstone. The cup recognises excellence in an up-and-coming Registered Master Builders Apprentice.


Alex also placed second in the recent Apprentice of the Year competition for the Waikato region.


His employer, Livingstone site manager Neville Davy, describes Alex as a team player who works hard and is not afraid to tackle any task head-on.


BCITO training advisor Graham Boswell says he is a confident young carpenter who is developing into a great leader, and who leads by example.


Alex believes his attention to detail and dedication to excellence stands him in good stead for his future in the industry.