Home Apprenticeships Nathan makes history at Apprentice of the Year 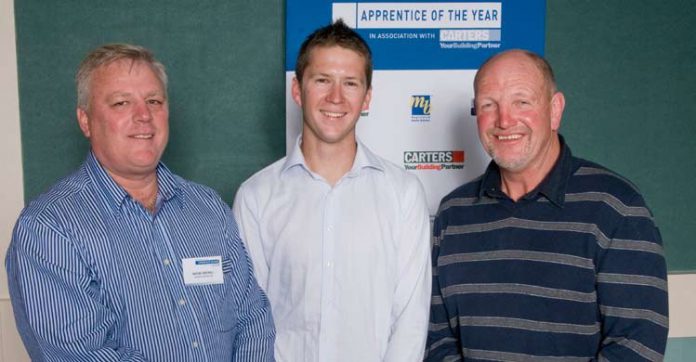 Construction manager at Mackersey Construction Mark Adams could not have been happier when one of his apprentices, Nathan Biggs, made history at the 2009 Registered Master Builders Apprentice of the Year, in association with Carters.

Nathan, who took out the top award, was the first winner in the history of the competition to have only worked on commercial projects. “I’ve been training apprentices for a number of years but 2009 really was a standout,” Mr Adams says. “Not only did Nathan make competition history, but our boys were also placed first and second at the regional competition — what more could you ask for!”

Mr Adams first met Nathan when he started his apprenticeship in October 2007, and describes him as an apprentice with the “whole package”. “Nathan’s got everything you could want in an apprentice — he’s committed, focused and talented. At 25 he’s a few years older than some of our other guys, but once he worked out he wanted to be a builder he really hit his straps.”

Mackersey Construction currently has 19 apprentices, and the company believes it’s important to have a balance of experience within a team. “You need the young and dynamic apprentices as much as you need the older guys with years of experience. It’s important to have a balanced team with a mix of strengths. “We have apprentices that range from 18 to 40 years of age, and everyone brings something a little bit different to the team.”

Mr Adams remembers what it was like to be starting out in the business, and has fond memories of his apprenticeship at Mackersey Construction 38 years ago. “I went through the same processes that my young apprentices go through and really enjoyed it, which is probably why I’m still with the company. All of our apprentices have the chance to move up through the organisation — you can go as far as your dreams will take you,” he says.

Mr Adams spends time with one apprentice every day so that all 19 have some one-on-one time with him, something he considers vital to turning his young men into great builders. “I think the standard of our apprentices is a credit to our foreman, our training processes and our company culture. The entire team contributes to the development of each apprentice.”

He believes it’s crucial for established construction companies to bring young blood into the construction industry through apprenticeship programmes. “There are so many passionate young guys out there that are just dying for a chance at an apprenticeship. We’re an ageing industry, with the average age of a carpenter being around 40 years old,” Mr Adams says.

“The benefits of hiring an apprentice outweigh the costs by a long shot — apprentices will bring new talent, fresh ideas and some different dynamics to your business.” Mackersey Construction supports the apprentice process wholeheartedly, and will continue to ensure that enthusiastic applicants get the chance to become the builders of tomorrow.

Entries for the 2010 Apprentice of the Year are open from 6 April 2010 and close at the end of June 2010. For further information, or to download an entry form, go to www.masterbuilder.org.nz, www.bcito.org.nz, or www.carters.co.nz. Entry forms can also be collected from Carters stores nationwide.