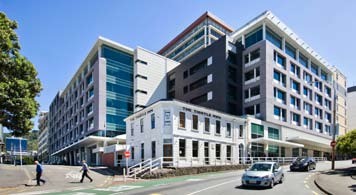 A top effort from Mainzeal Construction saw the company take out two national titles in the RMB 2009 Commercial Project Awards, in association with PlaceMakers. Mainzeal was named national winner of the Education Project category for the Victoria University Coastal Ecology Laboratory on Wellington’s south coast, and the National Retail and

“The team didn’t just include Mainzeal, but also AMP Capital Investors, the existing tenant, the Ministry of Justice and the consultant teams,” Mr O’Donovan says.  “We had strict systems and time lines, and we always made sure everyone had an in-depth understanding of the project. With up to 20 of our own management staff across the job, it was really important everyone was on the same page.”

Mainzeal Construction won the building contract for Vogel Centre Stage 1a in 2006. Prior to the contract being signed, all parties were engaged in a lengthy planning phase. “The project was planned across five years and was broken down into three stages — 1a, 1b, and 2. We’re now working on Stage 2, and by early next year we should have the whole project done and dusted,” he says. “The great thing about the project is that with careful planning we’ve been able to retain the useful part of the old building, while upgrading it and also adding to it substantially — all to meet the needs of the client and the tenants. It was a real exercise in working together.”

Mr O’Donovan has been working in the construction industry for about 25 years. Prior to joining Mainzeal as a project engineer in 1993, he had worked in construction in the United Kingdom, Australia and New Zealand. After many years with Mainzeal, he believes a large part of the company’s success comes down to building and maintaining strong relationships, and making sure commitments are followed through.

“At Mainzeal we’re very relationship-orientated, and have the philosophy that you’re only as good as your last job. And we get a lot of return business, which is one of the best compliments you can receive.” He says the Vogel Centre project is a great example of just how relationship-focused Mainzeal is. “We worked really closely with the client, AMP, and the tenant, the Ministry of Justice, to ensure that not only was the construction executed well, but that all parties were kept happy along the way. That’s not to say there haven’t been challenges, but we all got stuck in and worked our way through these. “A great example of this was when we all came together to decide on tolerance controls for construction work, agreeing on factors like acceptable noise levels and construction times.

Everyone who worked on the job had to comply with the restrictions that we had all agreed on.”For 2010, Mainzeal is focused on maintaining its high standards and encouraging clients to involve them in the preliminary stages of building.“There are many benefits to the client if the contractor is involved in the first stages of a project’s development. For the Vogel Centre, Mainzeal provided a Design Build solution, which meant we fixed the cost and also the time for the project. This gave AMP and the Ministry of Justice certainty.”

Mr O’Donovan says the RMB Commercial Project Awards are a real asset to the industry. “The competition gives us the opportunity to showcase our abilities and test ourselves against the competition. It’s great when a third party rates your work and you come out on top!” The company is also working on a number of exciting developments this year that will be entered in the 2010 Commercial Project Awards.

“Right around the country we are heavily involved in specialised facilities, and many of these will deserve to be showcased. “Whether the facilities are schools or hospitals or, as is the current case in Wellington, an international passenger facility for WIAL, we are seeing more and more that the client wants to work closely with the contractor so that their facility is properly customised for their needs. “This is a great way to work, and very satisfying for all.”