Home BCITO Gearing up for a future workforce 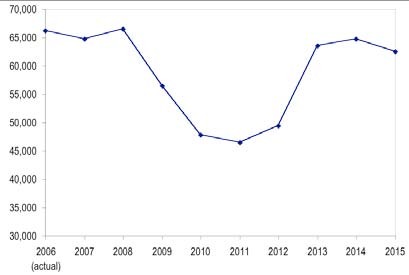 Large numbers of new workers will be needed over the next two to four years to meet growing demand for construction, according to the BCITO’s latest Building Our Future — Activity and Labour Trends report, released in March.

This is good news for the industry, and it is especially pleasing for the BCITO to be seeing a more positive mood as we talk to industry employers about their willingness to bring on new apprentices, and their ability to bring on new staff in general.

After a tough year in 2009, where we saw the number of apprentices signed into training agreements with the BCITO fall by close to 18%, the predicted future increase in labour demand is of great interest — and concern — for the BCITO.

Whilst we are expecting total labour demand across our industries to fall by another 3% during 2010, Figure 1 shows that a 6% rise is expected in 2011, followed by a predicted increase of close to 30% between March 2012 and March 2013.  What does this mean for construction businesses? The demand for labour, especially skilled labour, will increase during the next 12 months. This increase in demand will drive the cost of labour up and will increase the lag between the time labour is required and when it is found.

In other words, employers won’t be able to count on finding skilled people when they need them. They will need to predict when labour will be required, plan ahead and bring new trainees on board early.

To replace workers leaving, and to meet the growth in demand for construction, the industries covered by the BCITO will need to recruit around 5000 new workers over the next 12 months, followed by 9000 workers and 20,000 workers in each of the following two years, as seen in Figure 2. To help meet growing demand for construction, and for employers to meet the resulting increase in new workers needed in the industry over the next two to four years, training needs to start now, so new workers are available in time.

For more information, or to talk to us about taking on new trainees, please phone the BCITO on 0800 4 BCITO.