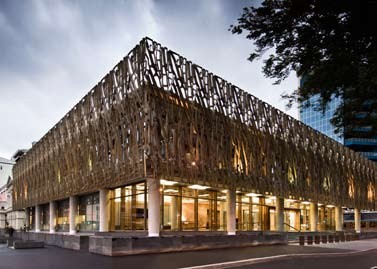 Design avoids ‘monumentalism’ of past courthouses In Warren & Mahoney’s Wellington offices sits a small kauri cone. This modest object, with precise spirally-arranged overlapping scales, was the catalyst for the main courtroom in the new Supreme Court building in Wellington.

The Supreme Court building and its revitalised partner, the former High Court building of 1881, now house New Zealand’s highest judicial institution. After almost six years in a temporary dwelling, the Supreme Court of New Zealand has a home of its own. “The self-belief of a young New Zealand in building the old High Court was remarkable. A strong sense of this history and the same confidence in our country’s future pervaded the design team that worked on the new Supreme Court,” according to Wellington-based Warren & Mahoney director Roy Wilson.

Designed by architect Pierre Burrows, the Category I historic building sat unused for most of the past two decades, presenting a restoration and architectural challenge when it was decided to build the new Supreme Court alongside and integrate the two.

The design was a collaboration between Warren and Mahoney’s Wellington and Christchurch offices, under directors Bill Gregory (Christchurch) and Roy Wilson (Wellington), along with heritage architect Chris Cochran and Christchurch artist Neil Dawson who provided input in the later design stages, resulting in the addition of the red flowers.

Chris Cochran’s speciality, Warren and Mahoney’s experience in the restoration of Parliament Buildings and the willingness of tradespeople to come out of retirement to assist in the restoration were key to the rejuvenation of the original High Court to “as new” condition.

In fact, the addition of base isolators beneath the old building to cradle it from earthquakes means it can fairly claim to be superior to the original. After extensive consultation with the Supreme Court Judiciary, the NZ Historic Places Trust, the Ministry for Arts, Culture and Heritage, Ministry for the Environment, Ministry of Justice

Ministers and Wellington City Council, the design of the new Supreme Court was revealed in September 2006. At the time Historic Places Trust chief executive Bruce Chapman called the design “an exciting and contemporary solution that reflects New Zealand’s unique natural heritage, and respects our historic heritage”.

The challenge lay in connecting a court for 21st Century New Zealand with a 130-year-old heritage building in a way that does full justice to both — and to our past, present and future. The design sought to complement — not overpower nor dominate its venerable partner — the humanitarian and approachable rather than the “monumentalism” of courthouses of the past.

It set out to reflect “open justice” in a way that must have been inconceivable in the earlier era when buildings were, by nature, imposing and exclusive. Commitment to openness Such has been the commitment to openness, the proceedings within the courthouse will be visible from Lambton Quay. The Supreme Court was also conceived to make a direct connection with its broader ring of neighbours, in particular the Beehive, Old Parliament Buildings and the Cenotaph, repeating their extensive use of bronze and copper to give a sense of durability and refinement.

Again, this avoids competing with the heavy stone of its immediate neighbour. The new building’s two-storey facade is embraced by a bronze screen made from recycled, extruded and welded panels, whose rhythmic forms are based on a tracery of rata and pohutakawa trunks and branches. These give privacy and shade to the judges chambers, yet add to the sense of openness and connection with the world outside.

In Wellington the pohutakawa tree and the rata are powerful symbolism for a court that is the central point of justice for all New Zealanders. At the core of the building is further imagery based on an iconic New Zealand tree. There sits the courthouse itself. To enter is to stand inside a vastly over-sized version of a kauri cone, exemplifying strength, security and future promise.