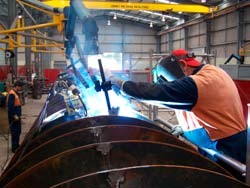 Last year, as part of the environmental emissions upgrade of the Societe le Nickel (SLN) smelter in Noumea, the structures and mechanical air ducting for two projects (the Shaking and Bessemer Projects) were designed in, and procured from, New Zealand for shipment and erection in New Caledonia.

New Caledonia is a small country with a population of about 250,000. With the construction of two other major industrial projects under way at the time, fabrication capacity in the country was limited.

Thus fabricating in New Zealand was economical, and did not tread on the toes of New Caledonian industries. The project’s success shows the calibre of New Zealand steel design and construction professionals who were able to design, procure, fabricate, paint and ship all the steelwork for a project overseas with exacting results, despite a very condensed time frame.

Ultimately it shows what can be achieved with real collaboration, strenuous effort and a positive attitude. Steel was used for two clean-up projects at the smelter as part of meeting new environmental emissions standards. The Shaker and Bessemer processes in the SLN Smelter produce harmful fumes and particulates. These had to be captured, and “clean” air vented to the atmosphere.

Approximately 300 tonnes of ducting manufactured from Cor-ten plate steel, and 250 tonnes of structural steel for the towers and trestles to support them were shipped to Noumea. The circular ducts, ranging from 800m to 1200m in diameter, were designed to capture and transport dirty gases to a gas cleaning facility. The towers and trestles that support them are between 10m and 20m high.

Beca carried out the process, mechanical and civil/structural design, procured the equipment and steel, and was the direct New Zealand interface for the projects dealings with SLN. “Everything was precision designed, even down to all material being able to fit inside standard shipping containers,” according to Gareth Hancock, consultant at Beca, Auckland. For Beca, the biggest challenge in the design of the ducts was the varying temperatures during the process cycles, with gas temperatures up to 600°C.

This was overcome by incorporating expansion joints at various points and carrying out detailed stress analysis of the ducts. All structures and ducts had to withstand cyclone wind forces, and were designed to New Caledonian regulations and French codes. Economics, both in time and cost, made steel the structural support choice. Grade 300 steel was used for the critical strength and deformation required. “Cor-ten” steel was used for the elevated ducts due to the potential high temperatures of the gases. The chemical composition of Cor-Ten steel provides high resistance to atmospheric corrosion.

Grayson Engineering was chosen for the project as a fabricator highly experienced in ducting work and structural steel. There was close collaboration between the two parties, with regular, generally weekly, meetings. “The quality of the drawings provided by Beca was great,” Grayson Engineering’s David Moore says. “This made quality control easier when the project unexpectedly came under extreme time pressure.

A worldwide shortage of Cor-ten steel at the time moved the goal posts dramatically. Despite this, Grayson Engineering was able to source material and draw on and co-ordinate other fabricators to meet the target dates of both projects in mid-2009. The main trio dealing with the bulk of the plate cutting, fabrication and welding were Grayson Engineering (Auckland), Energyworks (New Plymouth) and TP Engineering (Auckland). Other companies involved around the country were Jensen Steel Fabricators (Tauranga), PFS Engineers (Hamilton) and Kawerau Engineering (Kawerau).

“The most heartening thing about this project is the coming together of professionals with a can-do attitude who want to make it happen,” Mr Moore says. “That we completed the fabrication to time, and that it all fitted exactly on site is a reflection of the diligence and attention to detail of everyone involved.” And the willingness to work shifts around the clock! “The work time was condensed dramatically — with the equivalent of six months’ work having to be completed in just three,” TP Engineering’s Tony Herewini says.

Quality management throughout was an absolute necessity. There was no room for error because if it did not fit on site in New Caledonia it would have been a nightmare for subcontractors, with major cost implications, given the high price of labour there. The result was a flawless perfect fit — and on deadline! It shows the level of expertise ingrained in New Zealand’s local industry — 100% world standard operators.