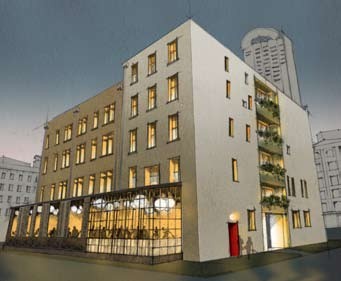 Work is now well under way on the restoration of 19th Century warehouses Stanbeth House and Excelsior House, the next two buildings in the Britomart heritage restoration programme. Cooper and Company began work renovating the buildings in January of this year, and expects to complete both in September 2010.

The Stanbeth and Excelsior buildings, which stand adjacent to each other on Customs Street East and which both date from around 1885, are being fully restored in consultation with heritage architects Salmond Reed.

The completion of the two buildings will bring to eight the number of historical buildings at Britomart fully refurbished by Cooper and Company, including the CPO, the Northern Steamship Building, the Union Fish Building, the Levy Building, the Maritime Building and Charter House.

“We’re delighted to have restoration of our next two beautiful buildings under way,” Cooper and Company chief executive Matthew Cockram says. “Leasing is going well on both buildings, and we’re looking forward to them opening in September for everyone to enjoy. “The opening of these two buildings is particularly exciting for us because it will mean the entire Customs Street East frontage of the precinct is activated at street level, from Debut at number 10 all the way round to The General Store on the corner of Britomart Place and Bike Central next door.”

Leasing of the Stanbeth and Excelsior buildings is yet to be fully finalised, but Cooper and Company confirms the ground floor of each building has been leased, and will be occupied by food and beverage retailers.

The upper floors will be boutique office space marketed to the creative commercial sector in line with the other heritage buildings in the precinct. All the refurbished heritage buildings at Britomart are fully tenanted, with the exception of the Union Fish Building on Quay Street, whose ground floor space is currently used as a Britomart event venue.

Cooper and Company will continue to restore the balance of Britomart’s 17 heritage buildings over the next few years. Seven new buildings are also being built in line with the master plan for Britomart, which will see heritage and state-of-the-art “green” buildings standing side by side throughout the precinct.

Charter House is New Zealand’s only heritage building to have achieved Green Star NZ certification. It is also the first time a Green Star – Built rating, as distinct from a Green Star – Design rating, has been awarded by the NZGBC.

Cooper and Company’s ongoing Britomart development programme is governed by its contract with the Auckland City Council for the long-term ownership and development of the precinct.