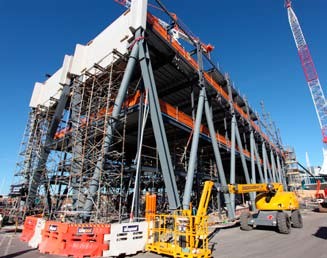 Due for completion in time for the Rugby World Cup next year, the new $65 million Novotel Hotel, that is being developed by a consortia including Tainui Group Holdings, Auckland Airport and Accor, and designed by Warren and Mahoney Architects, is a bracing example of kiwi innovation with steel.

To achieve the tall slender structural design of the 12-storey building required the ingenious use of more than 700 tonnes of steel. As planned, once it made it to the crucial bracing third level, the building process literally took off. Temporary steel bracing structures and ultra-smart sequencing of ComFlor decking turned design and time challenges into an exacting art. Scott Delacy of George Grant Engineering and John Abercrombie of Hawkins Construction discussed the special features of this project, and the inventive solutions.

The biggest challenge was getting it to Level 3 from where clever bracing and erection methodology enabled the rest of the construction to take off at speed. “The pressure was on to Level 3,” Mr Delacy says. “From there, there’s been a floor going up each week. Together, as a team, we nailed every challenge.” The whole hotel structure, steel frame and ComFlor metal decking, is 80% steel — and a central core of concrete walls provides the main lateral load resistance.

So the steel rocketed up, leaving a hole in the middle of the building until the concrete wall could be poured. This had to be very tightly managed. The in-situ concrete core was done with a large Peri formwork system — a versatile system with few components that met the demands of the job in a very simple way.

Normally, the central walls would have been poured, with the rest of the floor structure built off that to provide stability. But to meet all the requirements of the design, this proved to be a fast and ingenious solution. This could not have been achieved, as Mr Abercombie described, without “smart programming and great teamwork”. A second issue for smart programming was the special welding required for the stunning building façade. The large diagonal “V” columns that zig zag from the ground floor to Level 3 are impressive, making it a very striking building.

The big “V” CHS columns required tricky configuration to achieve their dramatic sculpted form. Here, composite beams that were 100% x-ray tested for compliance were used. Decorative glass fibre reinforced concrete panels adorn the diagonal high strength CHS columns from ground to Level 3, and the north and south elevations. “This Novotel Hotel is a one-off design — and part of building every building is to look at the plans, understand the engineer’s idea, and push your expertise to find the best way to make it work,” Mr Delacy says.

Finding appropriate weld procedures specific to each application is part of that. For example, the two end concrete walls were joined by steel coupling beams that had to be welded together on site — working on very tight tolerances.

Currently the project is right on target for completion in April 2011. Structural steelwork and internal in-situ concrete core is up to Level 9, and poured to Level 6. Pre-cast panels and curtain walling to the facade have commenced. Floor pours are on a 10-day cycle, and internal cores every six days.

The outcome will be a brilliant 4 Star-plus hotel right in the airport terminal precinct, just what the tourism industry has needed for a long time — a building whose design, including natural materials, facade transparency and inspiring form reflects the essential qualities of New Zealand’s heritage.

The elegant and contemporary Novotel will have 263 rooms, a gymnasium, a 150-seat restaurant and bar, 11 meeting rooms, a conference/function room for 300 people and an airline crew lounge.

The doors will be open right in time for the Rugby World Cup next year.