Home Latest News There is some light at the end of the tunnel! 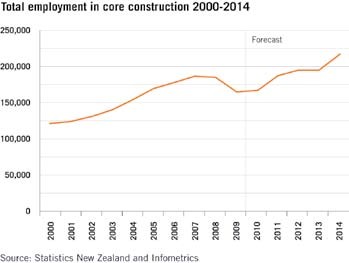 BCITO says employment expected to exceed peak 2007 levels Almost 10,000 jobs in the construction industry have been shed since the peak of 2007. It is said that employment in the industry bottomed out in 2009. However, the industry has been slow to recover, with experts predicting employment will increase only marginally in 2010.

The latest report from the Department of Labour (Jobs Online, 11 August 2010) shows the number of job ads has risen over the July 2010 quarter by 7.2%, with skilled jobs rising 8.2%. Skilled job ads for construction and engineering grew the most with a 13.3% increase.  The upturn is coming

From 2010 onwards, the employment of occupations within BCITO coverage will grow sharply, with employment levels expected to exceed the levels experienced at the peak of the construction boom in 2007. In an upturn, as has been the case in previous boom and bust cycles for the New Zealand construction industry, firms initially increase the hours worked by their existing workers before they consider hiring new workers.

Therefore, the trend in New Zealand has always been for growth in employment of construction-related occupations to lag slightly behind the growth in construction activity. Since the residential collapse in 2008, home building costs have not kept pace with inflation. The sharp drop in demand reduced the ability of builders to push through price increases, and the cost of home building subsequently levelled out.

While demand is still relatively weak, cost pressures are beginning to build again. The cost of home building is set to rise. Timber prices have been rising since late last year as greater demand for export logs puts pressure on the local supply chain. Steel prices are also on the way up and, with margins already tight in the industry, home builders may have little choice but to pass these increases on to buyers. Strong competition keeping margins low

The Department of Building and Housing’s Building and Construction Quarterly Report – June Quarter 2010) says subcontractors continue to report pressure on margins, and that there is intense competition for jobs.

Rising material costs are likely to keep a lid on margins for the foreseeable future, especially set against a backdrop of weak demand. Residential property prices in New Zealand are still rising, but at a slower rate, with some experts predicting they will fall around 4% in the next 12 months. QV research director Jonno Ingerson states that the volume of sales is about a third below the long-term average, with buyers putting off plans to enter the market in favour of reducing debt. ‘A do nothing sentiment’ “The lack of buyer demand, combined with an increasing supply of unsold houses, is causing values to gradually drop,” Mr Ingerson says. “Unlike 2008 when the overwhelming negative sentiment of the global economic crisis drove house values down, we are now seeing more of a do nothing sentiment,” he explains.

As economic recovery continues during 2011 and 2012, the undersupply of new building is expected to put a floor under house prices. That would prevent more significant declines and result in accelerating house price growth in 2012 to 2013.

The recovery of residential and non-residential building from 2011 onwards, together with continued strong growth in infrastructure, will result in strong employment growth for the construction industry through to 2014.