Home Industry News Roof collapse — what can we learn? 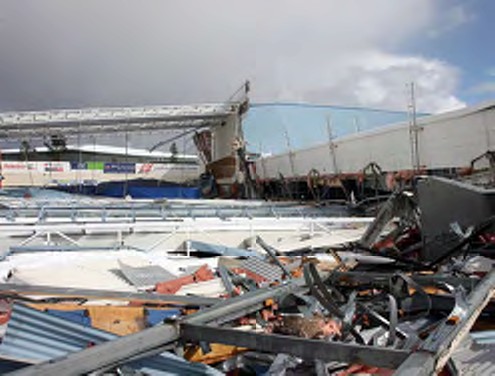 A decade after its commissioning, sections of the $10 million Southland Stadium in Invercargill will have to be rebuilt extensively following the collapse of the section of roof covering its community courts and reported damage to its structural integrity.

The roof failed on September 18 during a snow storm described as the heaviest the region has seen in 50 years. Several other roofs in the area also buckled or collapsed during the storm. The Department of Building and Housing and a local engineer appointed by the Southland Indoor Leisure Centre Charitable Trust are investigating the matter.

Areas of interest are the estimated weight of the snow on the stadium roof, the amount of wind, and the consequent estimated distribution of the snow over the roof. A report is expected by the end of October. Public opinion is divided over the roof’s integrity before the failure. The roof reportedly exceeded the building standard for snow load that was in place for a structure of its kind by 30% when built in 2000.

Mr Skelt says the decision goes “. . . a long way to putting any questions over the construction to rest”. However, historic media reports show the collapsed section of the roof has been in the spotlight before. The reports say during roof construction, several steel trusses supporting the roof across the community courts started to deflect outside the parameters expected in the engineering design.

A spokesperson for the stadium said at the time there were no safety concerns, and certification would testify to the structure’s integrity. The structure was subsequently peer reviewed and then signed off by Invercargill City Council engineers without any problems. But structural engineer Dr Charles Clifton, an associate professor at Auckland University, recently told media that New Zealand’s track record with large long-span roofs “. . . has not been particularly good”.

He believes the investigation is likely to find that the stadium was poorly designed or built or both, in which case, he says, New Zealand’s whole engineering system may have to be reviewed, something another prominent engineer, John Scarry, has been publicly calling for since 2002.

The Institution of Professional Engineers New Zealand (IPENZ) board has warned the industry against reaching premature conclusions. Following a major snowstorm in 2006 the snow loading code was upgraded. The upgrade took effect in 2008. IPENZ president Garry Macdonald told media the board had discussed whether the snow loading code should be reviewed again in view of the weekend’s extreme conditions. He added: “If this stadium collapse is found to be the result of significant design errors or procedural errors or both, then I think we will probably get the review that John [Scarry] has been pushing for for some time.”

Mr Skelt says the clearing of the site is now in progress, and already several rebuild meetings have been held. “Clearly there will be an opportunity for the local building industry to be involved in the rebuild,” he says. “Southlanders are very loyal to their community. The stadium catch cry ‘Game on 2012’ has really taken off, and the rebuild will be a total community effort.”

Southland Indoor Leisure Centre Charitable Trust chairman Acton Smith adds rebuilding is some time away. The Trust is currently calling for expressions of interest from engineering firms for design and peer review of the rebuild. There are also issues around the building design to be clarified, chiefly whether the new design will incorporate new snow and earthquake load codes, and how the new design will fit into the existing resource consent.

“This has been a difficult time for us. We want to ensure its design meets and exceeds the building standards so this will not happen again,” Mr Smith says. “But, yes, it will mean significant work for local builders.”