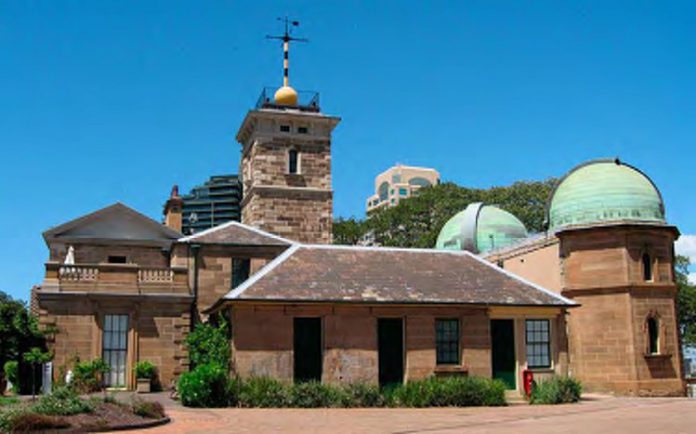 Visitors to Sydney who take time to explore the slopes above The Rocks may wish to direct their steps up Observatory Hill. At the summit they will find not only a magnificent view of Sydney Harbour, but also a historic observatory built of Hawkesbury Sandstone in Italianate style. It is worth an afternoon’s ramble.

The historic buildings date back to the 1850s, and were constructed at the instigation of the Governor, Sir William Denison. They were built alongside an existing 1848 signal station erected atop an early 19th Century fort established to guard against possible attack by the French — or convict rebellion. The original 1858 building of Alexander Dawson comprised a dome to house an equatorial telescope, a room with long narrow windows for a transit telescope, an office, and a residence for the astronomer.

In many ways, the most important service the observatory originally provided was a time signal, generated via the time-ball tower. Every day at 1pm the time ball atop the observatory tower would drop to signal the exact hour to the city and to boats in the harbour below. At the same time, a cannon, initially sited on Dawes Point, but later Fort Denison, was fired. There was one small problem with the original building. It was found that the eastern view of the original telescope dome was obstructed by the time ball. As a consequence, a western wing was added in 1877, with a second dome along with further office space and a library. The two telescope domes rest on octagonal bases, with a four-storey tower supporting the time ball.

Among important achievements of the observatory as an astronomical site are some of the first photographs ever taken of the southern night sky, and major contributions to the first atlas of the whole sky — The Astrographic Catalogue. Sydney’s input took more than 70 years to complete from 1899. Along with observations of the heavens, the Observatory collected comprehensive meteorological observations until this function was taken over in 1908 following federation by the Commonwealth Government.

However, the Observatory continued to supply daily records to the Sydney papers, including times of the rising and setting of the sun, moon and planets. By 1926 the building and its equipment had become a little tired, and a proposal to close the facility was only narrowly averted. Come the mid-1970s, increasing problems of city air and light pollution were making astronomical observations increasingly difficult, and in 1982 the New South Wales Government incorporated the entire building and its equipment within the Powerhouse Museum.

Today it is a working museum. Evening visitors can observe the stars and planets through a modern 40cm Schmidt-Cassegrain telescope or the 29cm refractor built in 1874, the oldest telescope in Australia in regular use. And for visitors’ entertainment, the time ball continues to be dropped at 1pm daily. The original mechanism is still in use, although the ball is no longer raised manually but employs an electric motor.