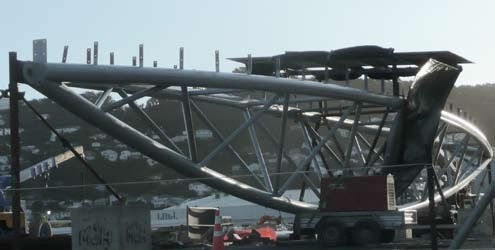 In 2006 Wellington City Council called for expressions of interest in a 12-court multi-purpose indoor community sports centre for the people of Wellington. It was to meet the current and future needs of sporting codes such as netball, basketball and volleyball while supporting emerging indoor sports, schools and the wider community.

The client brief stipulated that: “Given the large size of the building and the council’s focus on the need for high quality urban design, critical attention needs to be given as to how this building is externally articulated. Design to be aesthetically sympathetic to its neighbourhood and landscape.”

The client brief went on to call for “a clear and coherent design concept that speaks of its special role, civic pride and local identity.” Five teams were selected to take part in the competition, among them Sinclair Knight Merz (SKM), who had engaged Wellington-based Tennent + Brown Architects for architectural design and to support the SKM environmentally sustainable design integration into the project.

The site is at Cobham Park at the head of Evans Bay, near Wellington Airport. The ground here is reclamation fill with poor bearing capacity and, under high seismic loads, is subject to liquefaction. ‘Gateway to Wellington’ The solution that won the competition for SKM and Tennent + Brown was presented as a “Gateway to Wellington” building, consisting of a two-chamber ovoid layout with a splayed central spine, column-free over the playing courts and encircled by a breathing, see-though wall system of precast panels.

Over the top is draped a curved and faceted roof resembling the wings of a stingray. John Mason, leading SKM’s structural team, says a box solution would have been excessively imposing at this very large scale.

“The building is 12,500 sq m, and needs to be able to resist wind uplift and also maintain its integrity during a major earthquake. We defined the interaction between the substructure and the superstructure and separated these elements through articulated pin joints,” Mr Mason says. “These allow the expected seismic settlements to occur differentially across the footprint of the building, without causing catastrophic failure to the superstructure. “By adopting this approach, we were able to use relatively modest reinforced concrete pads, because these will adequately resist wind uplift while transmitting the gravity loads.”

The roof structure consists of long-span prismatic roof trusses (also known as bowline or fish-belly trusses) that are supported on tapering elliptical columns. The columns are also cranked. Hugh Tennent and Ewan Brown, directors of Tennent + Brown Architects, say they are like figures reaching into the upper space of the two chambers.

“They shorten the span of the main trusses without interfering with the height requirements of the sporting codes, and assist in compliance with the low height required by Wellington Town Planning,” they say. “We wanted the columns to taper so that they got smaller towards the pinned connections of the trusses and also towards the floor. “As an expression of the forces involved, architecturally it looks right. The SKM-designed steel structure provides the defining character for the vast interior. The structural design team has produced an elegant solution in both concept and detail, addressing extremely demanding joint arrangements.”

Extending along the centre of the building is a spine structure that contains the main vertical and horizontal load paths for the middle section. Within this form is a mezzanine structure that has been seismically separated from the main superstructure. There are administrative areas and meeting/social spaces at the southern and northern ends. The link between the two ends provides an elevated viewing perspective. On the flanks of the building, the support columns reflect the spine structure for the transmitting of loads. They also allow for the curved facade of the building.

Mr Tennent and Mr Brown say the staggered precast panels have automatic glass louvres between them, allowing the building to breathe. “Passers-by can see in while players can see out. Above each of the bowline trusses designed by SKM are roof lights that allow the courts to be naturally lit, making for large savings in power when the lights aren’t needed.

“The building is also naturally ventilated, thus sustainability is inherent in the design concepts.” The Kalzip composite ceiling and roof system, developed by Tata Steel International (formerly Corus), has been assessed as optimal for the centre, given its aggressive coastal environment. A total of 12,257 sq m is required.

First to go on is the lower sheet of aluminium, then three layers of insulation of varying densities, and lastly the difficult top sheet of continuous, cold-rolled aluminium formed in the air and zipped up from a high-level scaffold. This is the first time that Kalzip has been used for roofing in New Zealand. It delivers high quality thermal and acoustic insulation, with little or no maintenance needed over its expected 70-year life.

That represents a saving of around $22 million over conventional roofing over the course of the building’s lifetime. Kalzip is made from 60% recycled content, and at end of life 90% can be recycled again. Mike Prince, senior contract manager of principal contractor Mainzeal Property & Construction Ltd, says on the structural steel side, MJH Engineering has been magnificent.

“Malcolm Hammond and his team have done a lot of work for us in the past, but nothing that matches this high level of complexity,” Mr Prince says. “Those elliptical columns had all to be split down the middle from top to bottom, fitted with backing plates and given full-strength welds. Now we’re cracking along at the rate of an 11m bay in a week in one chamber, and the same again the next week in the second chamber.”

Wellington City Council senior project manager Jim Coard says that for indoor sports facilities to be successful, they must ultimately provide an environment that people enjoy, while at the same time meeting the functional needs of the users.

“Multiple sports groups will be able to use the venue simultaneously,” Mr Coard says. “The centre will also give Wellington a greater chance of securing regional, national and international sports tournaments.”

• Sports Floor 9130 sq m sprung timber, Junkers Unibat62 DIN (performance ratings for shock absorption) • 12 courts for local competition and training have 300 fixed and 400 loose seats • Configured as an international court, there is an ultimate seating capacity of 2222 • Configured for a banquet, it will seat 4000

• Parking for 317, approximately half under cover • There is no HVAC — all playing and ancillary space is naturally ventilated • 133 pre-cast wall fins with glazed louvres provide a natural thermal siphon • Radiant gas heating is installed with the pipework at high level • Solar water heating provides 45% of the water heating requirements, saving about $154,000 per annum