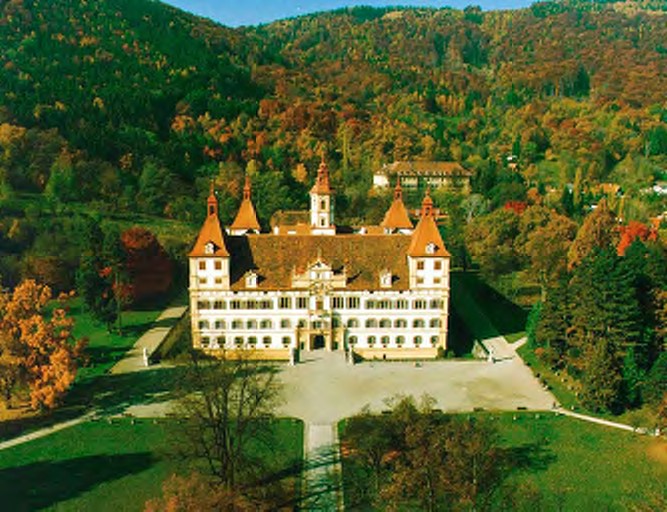 Europe has more magnificent castles than you can shake a stick at. Few, however, match the glories of Austria’s Schloss Eggenberg. Apart from being hopelessly overworked, descriptive words such as “magnificence”, “grandeur” and “splendour” simply don’t cut the mustard when it comes to this particular architectural masterpiece. If you ever get to Graz, take the time to go visit and judge for yourself.

At first glance, Schloss Eggenberg presents the image of yet another 17th Century Baroque palace, yet fragments of the building date to the late Middle Ages. Its core is a Gothic chapel dedicated to the Virgin Mary built in the mid 15th Century by Balthasar Eggenberg, financier to the Holy Roman Emperor, Frederick III.

The chapel was retained in 1625 when Prince Hans Ulrich von Eggenberg gave the family home a total makeover. The Prince wanted a grandiose residence befitting his role as Gubernator of Inner Austria. Imperial architect Giovanni Pietro de Pomis got the job, and took El Escorial in Spain as his model.

Hans Ulrich also wanted his palace to reflect the new ideas in astronomy, astrology and alchemy that were all the rage at court. This was the day and age when Copernicus, Galileo and Kepler were busily turning European society’s understanding of the heavens on its head. What the Prince wanted, the Prince got. de Pomis was fortunate in having Kepler resident nearby in Graz, and the Imperial Astrologer had considerable input into the final design.

The relatively new Gregorian calendar can be found everywhere. There are 365 exterior windows. Of these, 52, one for each week of the year, occur in the 24 state rooms of the main floor.

These 24 rooms are arranged in a ring to symbolise the hours of a day. Other floors have 31 rooms for the maximum days of a calendar month. A tower at each corner of the palace stands for one of the four seasons, its outside corner directed to one of the four cardinal points.

The upshot was that in 1666 when Hans’ grandson, Prince Johann Seyfried von Eggenberg, inherited, he found he had a fabulous structure to play with. He called in the decorators and artists and ordered them to turn his new home into an object of Baroque splendour. Among other things, he had the ceilings covered with a cycle of 600 paintings. Those in the 24 main floor rooms depict the four elements, the 12 signs of the zodiac and the seven planets.

It was a political statement. The finished work portrayed the Golden Age of the Austro-Hungarian Empire as guided by the House of Eggenberg. The grandeur was so magnificent that in 1673, the Archduchess Claudia Felicitas of Tyrol commandeered it as the site for her wedding to Leopold I, the new Holy Roman Emperor. Of course, the Austrians could not leave well enough alone. Subsequent owners felt the need to add their one ’n tuppence worth. In the mid 18th Century, the husband of the last

Eggenberger princess decided some ornamentation of a Rococo flavour was called for. And in the 19th Century the formal Baroque garden was totally replaced by a romantic English landscape.

The whole kit and caboodle got bombed in WWII. Post war, it became part of the Styrian Landesmuseum Joanneum who undertook an extensive restoration. It was finally opened to the public in 1953. Do go and visit if you are ever passing by.