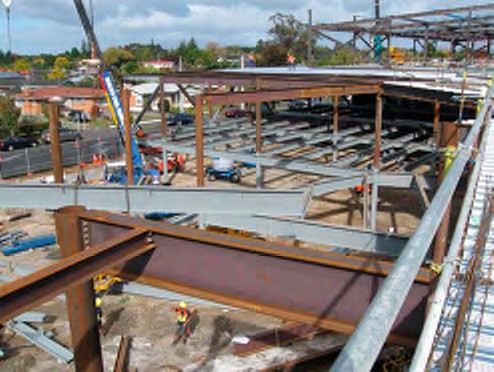 The expansion of the Westfield Chartwell shopping centre in Hamilton has been part of the company’s plans ever since its initial $40 million redevelopment in 2006. The green light was given when Farmers signalled that it needed a larger store to offer a wider product range.

Westfield’s design for the new two-level department store provided Farmers with 5800sq m of retail space, added more retail outlets to bring the total to 126, and increased car parking to 1100 bays. All told, this added up to a $33 million investment that increased the GLA to 28,500sq m. Westfield project manager Paul Wood says one of the group’s strengths is its vertical integration.

“Westfield is unusual as a property owner because we develop, we design and we build. For example, we have our own architect and our own engineer, and the ease and speed of communications between our various disciplines makes for rapid decision making and great efficiency,” he says. “One of the advantages this gives us is we are able to set rigorous schedules, achieving and often beating tight deadlines while staying within budget.

“From our previous experience at Chartwell, we knew that the ground conditions needed due consideration. Initial indications were that the foundations would need piles sunk to a depth of 18m. “Further investigation showed that the below-ground conditions were the same throughout the site, and we were able to prove we would achieve stability using pad foundations that were 5m x 5m x 1m deep, with interconnecting ground beams as required. That got our construction programme off to a flying start!”

Work got under way on 21 January 2010. The extensions were comprised of two new structures — a two-storey building to the south of the existing shopping mall and housing ground floor car parking, retail on the first floor and both retail and car parking on the third floor; and to the east of the existing mall a new, single-level car parking building adjoining the existing car park structure.

While under construction, the two buildings were kept discreet from the existing shopping centre so that the work had minimal impact on shoppers, and required only the temporary closure of one entrance.

The safety of the public was never an issue, since all construction work was carried out within its own separate zones. Mr Wood acknowledges that the project benefited greatly from the production of a 3-D model. “Once in-house architect Garo Garabet had completed his drawing, we engaged Zoran Rakovic as the engineer to produce the 3-D model. Zoran’s company, Xona Ltd, did this using sophisticated ProSteel software.

“The advantage of a 3-D model is that you can see if something clashes or is missing — it shows up on that third plane.” When the 3-D model was exported to Waikato Steel Fabricators Ltd (WSF), they made modifications following some changes required by Westfield. WSF detailing manager David Armitage says the fabricator’s drawing office also works in ProSteel.

‘We quickly produced shopfloor drawings from which we were able to place our order for all 680 tonnes of steel for fabrication,” Mr Armitage says. “The teamwork with Xoran Ltd was the best we’ve enjoyed for some time. When a problem arose, Zoran would be there immediately and take ownership. “Often he just popped in to keep an eye on things. He was always receptive to what our erectors on site had to say. We found him brilliant to work with!”

Asked if the 3-D model was the key to Waikato Steel Fabricators finishing the steel erection two weeks ahead of schedule, Mr Armitage says it certainly was a factor. “But I think it started at the top and moved down the delivery chain. Westfield knew what they wanted in their design and there were very few design changes.” Mr Rakovic says the construction programme was compressed largely because of the almost exclusive use of steel framing.

“We used steel columns and steel primary and secondary beams. We used circular hollow sections filled with concrete to give the required fire rating. Eccentrically-braced and K-braced frames formed the lateral load resisting paths. And 3-D modelling ensured that all the components fitted quickly and easily during the erection phase.“ Waikato Steel Fabricators managing director Gary Lightfoot says he’s very proud of his team’s response to the tight deadlines set by Westfield.

“The quality and performance achieved were due primarily to the team effort between our workshop staff and the site crews. Consistent accuracy in the workshop ensured increased speed and efficiency during the erection process.” Mr Lightfoot says. “We started erecting on February 10 and finished the main structure on April 23 — that’s 10 weeks, a good result I’d say.”