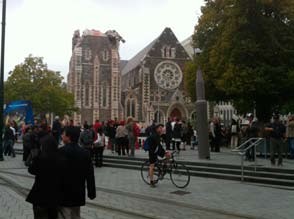 For generations Christchurch’s cathedral has been the city’s symbol, its focal point and, in many ways, its very identity. Of all New Zealand cities, Christchurch evolved as a cathedral city in the classic European mould, with the cathedral’s spire towering over the surrounding plains. Today the stump of the toppled spire still stands proud, exemplifying our second-largest city — broken but not subdued.

The dream of a city built around a cathedral — and a university college — arrived from England on the first four ships in 1850 with the Canterbury Association. Their model was Christ Church, Oxford.

The realities of survival in the new land put the cathedral project on the back burner. It was revived six years later with the advent of Henry Harper, first Bishop of Christchurch. In 1858 the male population of the new and growing town gave the good bishop the thumbs-up to proceed with the cathedral.

Plans were commissioned from the pre-eminent English Gothic architect of the day, George Gilbert Scott. These initial plans called for a wooden building but were modified when good quality masonry stone was found locally. Banks Peninsula totara and matai provided the roof trusses.

Fourteen years down the track the foundation stone was laid — in the town’s swampy ground that would cause all those liquefaction problems 145 years hence. Building began with elan, only to be soon abandoned when funds ran out.

Anthony Trollope visited in 1872. He saw the cathedral as an “honest, high-toned idea”, but described the “vain foundations” as a “huge record of failure”. Just a year later, resident architect Benjamin Mountfort started anew. He tweaked the original design, adding the tower balconies, west porch, font, pulpit and stained glass.

In 1881 the nave and tower of the cathedral were completed and consecrated. The vision of those 1859 settlers seemed near to fulfilment, yet it would be a further 23 years before there was enough money to add transepts, chancel and sanctuary.

Nonetheless, in terms of European cathedral construction, Canterbury’s settlers had proceeded at lightning speed. Brisbane’s Gothic masterpiece took from 1906 to 2009. The final cost for Christchurch’s new edifice as of 1904 was £64,000.

The cathedral had suffered damage in earlier Canterbury quakes. Within a month of its consecration in 1881 a stone was dislodged from the finial cap below the terminal cross. On September 1, 1888, 8m of stonework fell from the spire.

In 1901 the top of the spire toppled yet again during the November 16 Cheviot quake. This time the stone construction was replaced with Australian hardwood sheathed in copper. Then came September 4, 2010. However, the then damage was seen as minimal and the cathedral reopened on September 22.

But the monstrous 6.3-magnitude February 22 quake consigned the entire 130-year-old spire to a pile of rubble. Still, its lower tower stands defiant and continues to symbolise the city. Already suggestions have been aired that this is how it should remain: determined, resolute and a memorial to those who died — lest we forget.

Building Today readers will find an excellent account of the Cathedral’s history and the recent quake damage at www.christchurchcathedral.co.nz.