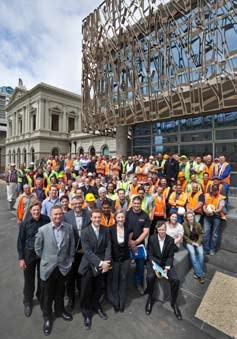 New business and marketing manager at Mainzeal Property & Construction Ltd, Penny Kerr, says the awards give the company an opportunity to benchmark their projects against others in the industry. “Clients choose us on our prices and on our track record — the fact that we’ve won awards is also a big part of that mix,” Ms Kerr says.

Mainzeal has displayed outstanding skills, and these have been well recognised throughout the competition. The 2010 gala dinner also saw the company go home with the Industrial and Infrastructure Project award for the striking New Zealand Supreme Court Building in Wellington.

Judges said everyone who visits Wellington should take the time to walk in and enjoy this building. “It is a building of two halves, with a controversial new exterior and restoration of the existing high court building. The orb, which is the internal courtroom, is one of the most spectacular rooms in New Zealand, its shape influenced by a Kauri cone,” judges said.

Ms Kerr said in 2009 that winning the Education Project was great for the entire team. “It really reinforces our level of quality and ability to deliver a premium product.” Judges said the Victoria University Coastal Ecology Laboratory was a particularly challenging project, but the builder overcame the complexities to produce a very high standard of workmanship.

They described the Vogel Centre project as “an exceptional, high-class building characterised by great attention to detail, from the stylish exterior to an aesthetically pleasing interior workspace”.

Ms Kerr summed up the sentiment of the 2010 Platinum Award after taking out the two categories in 2009. “It shows everyone we consistently deliver well, time and time again,” she says. The company also won the 2006 QBE Insurance Health Commercial Project for Kenepuru Hospital in Porirua, the 2007 RMB Commercial Project of the Year and the Health Project for the

Burwood Hospital Surgical Services Unit in Christchurch, and in 2008 the RMB Commercial Project of the Year and the QBE Insurance Retail and Business Project for Sovereign House in Takapuna, Auckland.

The Awards are made possible through the support of principal sponsor PlaceMakers, and supporting sponsors James Hardie, Gib Living Solutions®, Pink® Batts® Ultra® Nulook and the Department of Building and Housing.

For information about the competition, go to www.masterbuilder.org.nz.