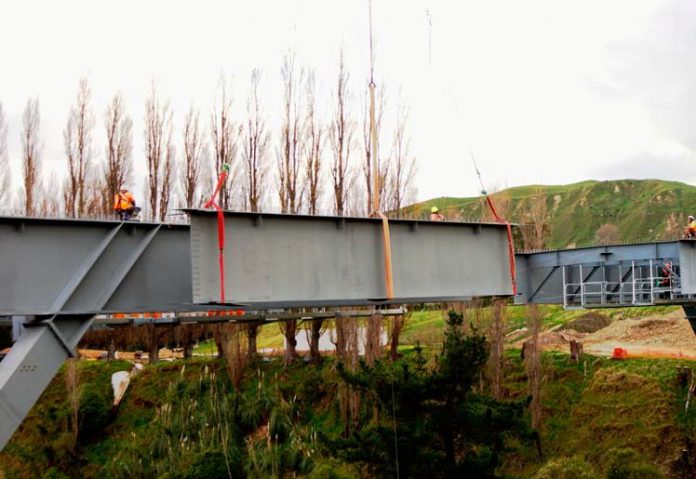 Between Napier and Wairoa, State Highway 2 used to wind and twist its way through the Matahorua Gorge. On average, about 4000 vehicles a day ran the narrow gauntlet of sharp bends, among them logging and farming trucks on their way to and from the port of Napier.

During winter, slips caused closures, and accidents and delays were frequent. So the NZ Transport Agency tackled the problem with one of the largest and most important projects ever seen in the Hawke’s Bay region.

It involved re-aligning SH2 to go over the gorge instead of through it, and that required two new bridges — a 37.4m-long road-over-rail bridge, constructed mostly in pre-cast concrete, and a 137m-long ladder deck plate girder bridge.

For the latter, three consortia submitted competing designs and prices, with Downer, Concrete Structures Ltd and the Holmes Consulting Group emerging as the winners. Napier-based Eastbridge, which has an impressive track record with bridges all over New Zealand, was appointed as the fabricator, while SteelPencil of Palmerston North did the detailing.

“The advantage of sandstone was that it could be prepared for piling using hand-held compressed air tools. This obviated the need for heavy plant, which would have necessitated installing temporary concrete benches,” Mr Hills says. “Instead, Concrete Structures was able to install 10.5m-long reinforced concrete piles at 45º angles, in preparation for the raked piers.”

After commissioning and testing at Rotorua, the crane — boasting a boom length of 180m — was delivered to the gorge in 24 truck loads. Concrete foundation beams were laid down on the Gisborne side of the gorge, from which the giant crawler crane set the 27m raked and braced steel piers onto the piles, holding the 65 tonnes of steel in place until the piers could be tied to the abutments with high-strength steel tendons.

“The frame bridge had three spans — 42m, 53m and 42m respectively. From the Gisborne side, the first short span was to cantilever out over the gorge. “The plate girders forming the two sides of the ladder deck superstructure were 2.8m deep. At an extension of 30m, this weighed more than 60 tonnes, justifying the use of the crane for economic and safety reasons.

“Once this structure was bolted, the crane was disassembled and taken to the Napier side of the gorge for the exercise to be repeated. Finally, the centre span at 53m was hoisted into position and bolted. “Once in place, the centre span effectively props the raked piers on each side. At 58m above the Matahorua Stream, this is as high as the top of Auckland Harbour Bridge.” Relatively light The design of the bridge drove not only the method of erection but also the steel fabrication. Eastbridge general manager Andre Van Heerden says the use of long-span steel kept the structure relatively light in weight, a total of 420 tonnes. “One of the main advantages from this is that less concrete is needed to anchor the bridge piers. By eliminating a central pier, we made little impact on the environment,” Mr Van Heerden says.

“The steel took only 12,700 hours to fabricate and 4800 bolts to erect. It was given a protective coating of zinc, and this allows at least 25 years to first maintenance. “We are confident the bridge will have no trouble fulfilling its 100-year design life.”

As Mr Hills puts it: “Simplicity of form usually gives the best value for money. We’ve commissioned him to design our next two steel bridges, for the Eastern Highlands of Papua New Guinea.”

Minister Steven Joyce officially opened the new bridge on March 11, 2011. It will shorten the route from Napier to Wairoa and cut 12 minutes from the journey. NZTA regional manager Mark Kinvig says it will save time and petrol but, more importantly, it will reduce the accident risk. “Wairoa is the gateway to Te Urewera National Park. For the town’s 8500 residents, this project will inject millions into the local economy over and above the value of its 60,000 hectares of pine forests.”