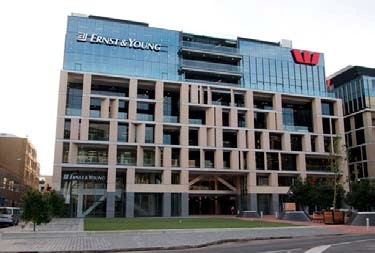 The three newest buildings in the Britomart precinct are now complete and their occupants, including commercial anchor tenants and ground-floor retail tenants, have begun moving in.

The two 10-level buildings are sometimes informally known as the East Complex, and front Takutai Square, the main public space of the precinct. Running between them at ground level is covered shopping and food gallery Atrium on Takutai, where retail tenants have also begun moving in. Environmentally-friendly buildings designed by Sydney-based architects Johnson Pilton Walker, both East Complex buildings carry New Zealand Green Building Council five-star ratings, placing them among the most environmentally-friendly buildings in New Zealand. Four food and beverage retailers opened for business recently at the eastern end of Atrium on Takutai. These include cafes Espresso Workshop and L’Assiette, sushi bar Smart Sushi and a new outlet of the Pita Pit franchise.

Soon a number of fashion and beauty retailers will also begin opening progressively in the Atrium. These include fragrance and cosmetic stores Jo Malone and M.A.C, which have both relocated to Britomart from Chancery, along with a new branch of L’Occitane.