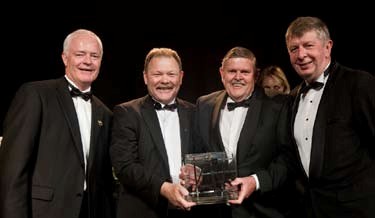 Platinum Awards, presented for the first time in 2010, are given to those companies that have achieved five or more national titles over the years of the competition. Hawkins Construction central regional manager Ross Hargood is proud of the Platinum Award, because it reflects achievements across New Zealand over a number of years. “The pride you get from being involved in the competition and competing against your peers is great. Other builders should really give it a go,” Mr Hargood says.  “It’s good to know that you’re up against the best too, so the more builders that enter, the better the competition becomes,” he says.

Hawkins Construction won its first national award in 1998, the Firth Industries Alternative Building Systems Award, for a property in Hamilton. Seven years later it won the 2005 Commercial Project Award $2 million – $5 million for Innovation Waikato in Hamilton, and in 2008 it won the Tourism and Leisure Project for Te Puia in

Rotorua, and the Health Project for the Waiatarau Acute Mental Health Unit in Waitakere. The Education Project award in 2010 for the NZ ICT Innovation Institute in Christchurch was enough to bring Hawkins Construction to Platinum level. Judges described the property as a highly complex building, bringing “a modern and futuristic approach to education”.

Mr Hargood says the business advantages of the House of the Year and Commercial Project Awards are two-fold. “First, the awards showcase the type of buildings that we produce, and their level of quality, and it shows our ability to consistently deliver throughout the country,” he says. “Second, it gives our staff a sense of pride. Our staff know that the effort we all put in is recognised by our peers.”

While he says it is hard to measure whether customer enquiries have increased since winning the awards, Mr Hargood says customer awareness has definitely improved. “We promote ourselves with our awards — they are a great marketing tool,” he says.

In an ever-changing environment, Hawkins Construction welcomes new developments in the construction industry. “We adapt to the conditions that we’re currently facing, and we meet all of the challenges that face us. The company has survived for over 60 years, and we put that down to our ability to change as the market changes,” he says.

“Being part of the RMBF gives companies the opportunity to become part of a collective voice, especially about government regulations or issues that we might be facing. With the RMBF we are able to give and get support from other organisations and from our peers, and we are able to talk non-confrontationally about what is happening within the industry,” he says.

The Awards are made possible through the support of principal sponsor PlaceMakers, and supporting sponsors James Hardie, Gib Living Solutions®, Pink® Batts® Ultra®, Nulook and the Department of Building and Housing.