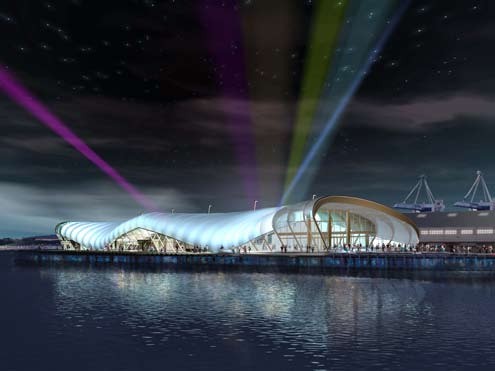 When put out to tender it attracted a winning bid from Fabric Structure Systems Ltd (FSS), in collaboration with architects Jasmax and builder Fletcher Construction. Jasmax’s Tim Hoosen says the architects had worked with FSS before on deployable structures, and quickly re-established their creative partnership. “We were thinking of Aotearoa, the Maori for New Zealand, land of the long white cloud, and began to design an amorphous roof, conceived as an opaque fabric membrane that would softly touch the wharf, curving, shifting and lifting in places to reveal clear transparency underneath,” Mr Hoosen says.

Trying to keep it simple to engineer and fabricate, FSS pursued the possibility of taking identical truss shapes and rotating them about the central axis. However, when Red Steel of Napier was awarded the fabrication sub-contract, chief detailer Hugh Paterson quickly figured out that, far from having an easy ride with repetitive identical shop drawings, his Tekla software was showing a 3-D model in which all the connection plates were on three different angles.

“The cleats are the connection points for the struts and various other members. Because of the three different angles, all of the 2-D fabrication drawings would be slightly different and more complex,” Mr Paterson says. “By the end of April, less than two months after starting, I had produced more than 1000 individual drawings, with some 400 of them assembly drawings — an awful lot of drawing for this size of building.”

The Cloud is almost 180m long, 11m high, has 33 main frame trusses, and can accommodate 6000 people. The feet of the trusses have a 21.9m spread, and are bolted to the wharf with ground anchors. The trusses are positioned along two straight grid lines at intervals of 5.75m. There are only two symmetrical frames on grid 13 and 29. Each frame comprises two 250 x 150mm Rectangular Hollow Section columns, connected to a curved truss fabricated from 150mm Square Hollow Section chords with 100mm webbing.

The undulations are achieved by making one column leg longer and its opposite leg shorter, progressively along the grids. All of the RHS members are fully sealed to prevent moisture penetration, and they are protected with Interthane 990.

Red Steel used truss jigs to speed up the fabrication of the trusses while maintaining accuracy, but the complexities of the connections required intensive detailing and constant communication with Wade Design Engineers Pty Ltd, whose consulting engineer Steve Rode-Bramanis is based in Brisbane.

Mr Paterson found him “very open to problem solving the connection details. We used Skype so that Steve could view our 3-D model and, in real time, I could show him what things would look like as we talked”.

The plan for The Cloud was to construct a mezzanine floor at the northern seaward end, to be used by VIPs and the media during the Rugby World Cup. There was a pause in the erection programme while the design was modified to create more legs, thereby reducing the weight per leg impacting the wharf at the mezzanine end of the building. The cladding consists of two materials — 6000 sq m of polyvinyl chloride (PVC) and 1250 sq m of ethylene tetrafluoroethylene (ETFE) for the see-through walls.

Used at the Beijing Olympics for the Aquatics Centre, ETFE is inflammable, 95% transparent, weighs only 1% the weight of glass and is extremely tough. Red Steel managing director Bob Hawley is particularly pleased with his company’s performance on this project.

“It called for total accuracy, which the Tekla software and our skilled team of fabricators enabled us to achieve. But there were more than 3000 laser-cut cleats of 80 x 30 x 10mm mild steel. Each one had to be drilled for two bolts and then welded by hand. In all, there were literally thousands of welds but no on-site corrections.”