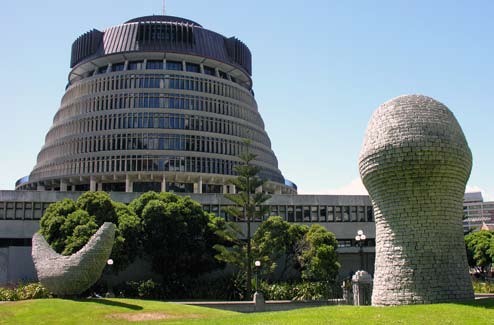 Urban legend holds that Spence dashed off his initial concept on the back of a napkin during dinner with the PM. Other accounts claim it occurred over lunch. Wherever and whenever, the sketch was drawn in Spence’s notebook.

Parliament and public alike gave the circular design a mixed reception, with Spence defending his proposal as serious, considered and practical.
At an aesthetic level he saw it as a symbol of unity with a historic precedent in Washington’s Capitol. On a practical plane he argued the building’s circular form would enhance its resistance to earthquakes.

The government architect got the job of turning Spence’s sketch into reality. It was not an easy commission as the circular footprint did not lend itself to efficient use of space.
And then there was the earthquake question. A specific base-isolation technology was developed by Dr Bill Robinson for the project, consisting of lead-rubber bearings that act as shock absorbers.

Construction of the traditional 1960s reinforced concrete structure was undertaken by Gibson O’Conner between 1969 and 1979. The finished building is balanced on 417 Robinson bearings using steel shims and layers of rubber.
And, of course, as the building emerged above the Bowen Street skyline, it was quickly christened The Beehive.

The austere concrete frontage has been relieved by cladding the lower walls in Takaka marble.
At the summit, the roof which consists of 20 tonnes of hand-welded copper, has achieved a not unattractive patina.


The Beehive stands 72 metres high. It has 10 floors above ground with four floors below. The top floor is occupied by the Cabinet offices. The next floor down houses the Prime Minister’s suite.

Other floors contain function rooms, including a television studio, press theatre, banqueting hall, gymnasium and swimming pool, as well as Parliament’s Visitor Centre and catering facilities, including Copperfield’s and Oliver’s cafes, and Pickwick’s bar, aka 3.2 due to its position in the building.
The building’s basement houses New Zealand’s National Crisis Management Centre. A tunnel under Bowen Street links the Beehive with parliamentary offices in Bowen House.

These days entry is through a security entrance with a bomb-proof, mail delivery room at the rear.
Although the Beehive’s circular footprint has a certain elegance, it is also impractical. Many rooms are asymmetrical and wedge-shaped. Except where purpose-built furniture is used, conventional desks and cabinets abut at awkward angles.

The core of the building is decorated with marble floors, stainless steel mesh wall panels, and a translucent glass ceiling. Columns are clad in Takaka marble, and wall panels include locally grown macrocarpa.

New Zealand art is displayed widely throughout. One of the larger pieces is to be found in the Banquet Hall where a large 3D mural by John Boys Drawbridge uses enamel gloss paint on aluminium angles to allegedly describe New Zealand’s atmosphere and sky.

In 1997, a select committee proposed moving the Beehive behind Parliament House so that the original 1911 plans of that building might be completed. When public reaction proved not even lukewarm to the notion it sank without a trace.