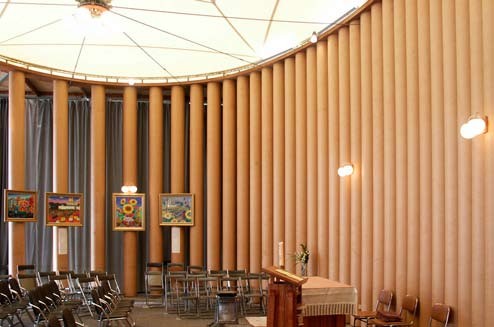 Japanese-born Shigeru Ban is a remarkable designer. In the media he is sometimes known as The Emergency Architect. He studied in the early 1980s under the legendary John Hejduk at Cooper Union’s School of Architecture, graduating in 1984.

Hejduk had a lasting influence on Ban. He enthused him with the concept of architectonic poetics — the creation of three-dimensional poetry. This led Ban to seek unique structural solutions from basic building materials.

Today, he has little interest in either new materials or techniques simply because they are new and trendy. Instead, he seeks out those materials that allow him to articulate his concepts behind specific buildings.

To do so, he blends architectural concepts from both East and West. Importantly, his buildings are characterised by invisible structural elements that become simply part and parcel of the overall design. Consequently, his structures are known for innovation, creativity, sustainability, beauty and optimism.

Of all his innovative approaches, Ban is most famous for his use of paper and cardboard tubing as construction materials. He finds cardboard an ideal building material. It is readily available, recyclable and surprisingly strong. His oft declared maxim is: “The strength of the building has nothing to do with the strength of the materials.” Not only are paper buildings low-cost, recyclable, low-tech and sustainable, but he delights in pointing out that they cannot be destroyed by earthquakes.

Importantly for Ban, his paper/card constructions produce little residue. His frequent quote is: “I don’t like waste.” As paper is not a traditional building material, the price is not cranked up by post-earthquake demand.

His basic card and paper buildings have achieved international acclaim in their suitability as DIY refugee shelters. They have also provided quick and effective low-cost housing for disaster victims around the world, as in Japan, Haiti, Turkey and Rwanda. Hence Ban’s renown as an “emergency architect”. But his cardboard techniques are capable of producing major structures. A typical example was the Japanese pavilion at Expo 2000 in Hanover. Here he collaborated with the architect

Frei Otto and structural engineers Buro Happold to erect a 72m long gridshell made from paper tubes. Stringent building laws in Germany required the roof to be reinforced but, post-exhibition, the entire building was recycled as paper pulp. Ban’s temporary card/paper buildings are weatherproof, fire resistant and secure. To date, they have lasted for upwards of 20 years. Once their working life is over they can be deconstructed and easily transported for recycling.

For example, a post-Kobe earthquake cardboard church is now a tourist attraction in Taiwan. The vast range of his paper and card structures are illustrated atwww.shigerubanarchitects.com. They include a concert hall in Italy, temporary shelters in Haiti, Singapore’s Bienale Pavilion,

Centre d’interpretation du Canal de Bourgogne, Hualin temporary elementary school, a nomadic paper dome in Amsterdam, a paper bridge in France, and a library in Japan. The web site is well worth more than a passing browse, particularly as we should soon be blessed with one of his larger structures in New Zealand. Ban has been working on the replacement for the Christchurch Cathedral pro-bono since May. His brief was to design a building that was sustainable, environmentally friendly, safe, durable, beautiful, innovative and versatile.

He has now visited the earthquake-stricken city twice. On his second coming he brought concept plans and a model. The design is based around 64 cardboard tubes, 830mm in diameter, and ranging in length from 17 to 22 metres. These will be sourced locally. The structure will have a triangular form with a geometry related to the original cathedral.

When complete, the cardboard structure will comfortably house 700 people and can double as an event space. The estimated cost is about $4 million, with the initial feasibility study funded by a $50,000 grant from the Christchurch Earthquake Appeal Trust.

Construction could be completed in three months. The target date for the opening is February 22, 2012 — one year after that last major disastrous quake. Ban does not mess around. His emergency buildings are commonly constructed by volunteers. Children as young as five helped erect his temporary housing in Izmit, Turkey, after the 1999 earthquake.

There is a notion afoot in Christchurch that while the construction of the Cardboard Cathedral would be overseen by contractors, volunteers would assist throughout. In particular, Ban hopes to engage students from the CPIT Architecture Programme in any build. He would like to pass on his skills and knowledge to New Zealand’s future generation — for him it is just another form of sustainability.

And if any Building Today readers are of a mind, donations are being sought for rebuilding the Christchurch Cathedral.

Check out www.christchurchcathedral.co.nzwhere you can also get an update on progress of Shigeru Ban’s cardboard version.