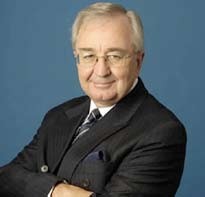 Mr Bickers is a chartered professional engineer working in Tauranga in management, governance, alternative dispute resolution and as an independent resource consent commissioner. He spent much of his professional career in local government, and was chief executive of Tauranga City Council from 1987 until 1995.

He has been active within the Institute of Professional Engineers New Zealand (IPENZ) for more than three decades, holding a variety of positions. He was president in 1991-92 and chaired the IPENZ disciplinary committee from 1994 until 2006.

Mr Bickers is a Distinguished Fellow of IPENZ and a Fellow of both the Arbitrators’ and Mediators’ Institute of NZ and the NZ Institute of Directors. He was appointed as the inaugural chairman of the Building Practitioners’ Board in 2005. He is also a Justice of the Peace.

The Plumbers, Gasfitters and Drainlayers Board is the statutory body which regulates the plumbing, gasfitting and drainlaying trades to ensure those providing these services are competent and safe in order to protect the public and property.

Mr Bickers says his goal during his time as chairman is to restore the reputation of PGDB so that it is respected and appreciated as a fair and responsible regulator in the public’s interest. The Board also elected John Simmiss of Hawkes Bay as the new deputy chairman.