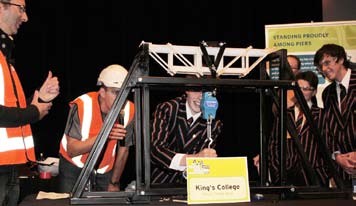 This is the first time Auckland high schools have entered the competition, with this entry beating hundreds of high school entrants across Australia and New Zealand to win the Aurecon trans-Tasman prize, as well as the local Auckland prize.

Ian Sloane, transport services leader for Aurecon in New Zealand, says this is a fantastic result for New Zealand, as it is the first time a national competition has been held in this country. “It is surprising that a first-time entrant has beaten hundreds of schools across Australia and New Zealand who have previous experience in designing bridges for this competition,” Mr Sloane says.

“And it is a testament to Kiwi ingenuity that Kings College has won the international competition for 2011.” The trans-Tasman competition asks year 8, 9 and 10 students to build a bridge out of balsa wood, string, cardboard and glue. At competition days held across Australia and New Zealand, the students bring their bridges to be tested to destruction. The bridge that bears the heaviest load wins the team a state prize, and puts it in the running to win the international prize.