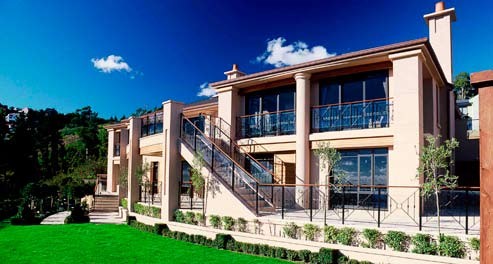 The award was presented to Canterbury’s Design Construction Ltd for its achievement of six national titles across the course of the competition. As we approach the 2011 national awards, we caught up with Mr Anderson on his company’s achievements over the years of the competition. It all started with Design Construction Ltd’s first National Award, a Supreme Award in 2001 for a new home in Canterbury.

“That win was huge,” Mr Anderson says. “We had a million dollar house up against $3 million and $5 million properties. We thought we had no chance, but it really showed that it is not money that wins awards,” he says. “It’s pretty hard to get [to National level]. It takes a great design, a great building effort and a really great team of people working on it, as well as a great client to achieve a fantastic result. “The competition is so tough, and it’s a really huge accolade to achieve a National title.”

Mr Anderson encourages other builders to enter the competition with something they’re proud of. “Do your best and enter a good project. The judges will find the best property. Every time we’ve received an award we’ve been surprised. Whether it’s a lifestyle award or a category win, it’s pretty awesome. It’s a great feeling,” he says.

“A lot of builders do some really good work, but it’s not until it is judged by your peers that you can actually have confidence to know where you sit compared with the rest of the marketplace. To be judged by your peers and to be acknowledged is hugely encouraging,” he says.

Although the company’s business has been affected by Canterbury’s devastating earthquakes, the company has entered a home in the 2011 House of the Year. The two-storey, concrete block house was designed specifically for temperature comfort, solar gain, maximum insulation and minimum use of heating and cooling systems. While it has been built with concrete floors suspended on piles, it was slightly damaged by the earthquakes.

“Hopefully the judges can look past the minor damage. The piles have saved it, because the land around it has dropped significantly,” Mr Anderson says. “But it is a beautiful, warm and quiet home, and the clients are very happy with it.”

The Canterbury earthquakes have had a profound affect on Mr Anderson and his company. “It’s been hard for the business. Every day there is a change in the landscape of doing business. Seeing the damage to beautiful and recently-built homes which have to be demolished is traumatic — especially if you’ve built the house,” he says. “The upside is the huge amount of potential work, but it’s a matter of getting through this lean period, staying in business and keeping our men in work.”

The Canterbury Registered Master Builders PlaceMakers 2011 House of the Year and RMB Commercial Project Awards will take place on Friday, September 2 — the last of the competition’s 14 regional events.

The Awards are made possible through the support of principal sponsor PlaceMakers, and supporting sponsors James Hardie, Gib Living ®, Pink® Batts® Ultra® (Tasman Insulation), Nulook and the Department of Building and Housing.