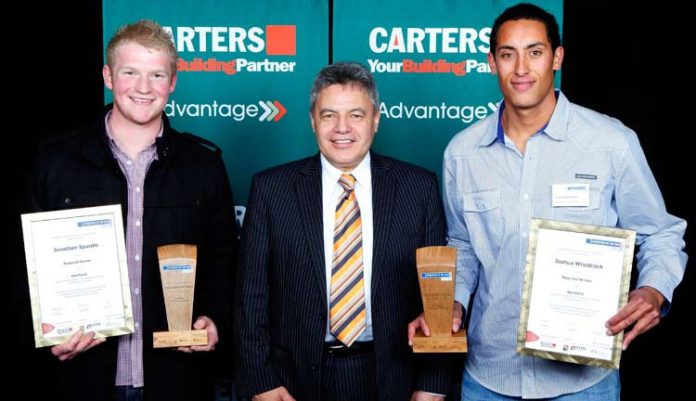 “This increase means there will be a strong inflow of younger apprentices who will be eligible for the Apprentice of the Year in the next two or three years,” Mr Karaitiana says. “Employers are starting to pay attention to all the data around how busy the industry is going to be over the next two to three years, and are starting to put together a plan for their business of managing that period,” he says.

Mr Karaitiana believes the Apprentice of the Year competition is a valuable experience for apprentices. But, he believes the most valuable experience from the competition is the boost in confidence it gives apprentices. “They tend to be much more confident about where they fit in the industry, and with their own abilities, so they stretch themselves to achieve more,” he says.

“Apprentices and people in the construction industry also generally work in relatively isolated and small work environments, so one of the things Apprentice of the Year brings to them is the opportunity to benchmark themselves against other people in the industry. So that is incredibly valuable,” he says.

“It also gives them a nice component to add to their CVs when people are looking at them as potential future employees or business partners.” The BCITO is the organisation appointed by the Government to develop and implement industry qualifications for the construction sector, and is the largest provider of building apprentices in New Zealand.

So there is nothing the organisation enjoys more than seeing talented young people becoming qualified tradespeople. “It’s what we live and die on really, that’s the whole nature of our business. The whole mission of the BCITO is to deliver as many trained and qualified people as we possibly can into the industry,” Mr Karaitiana says.

The 2011 Apprentice of the Year competition is well under way, with the last regional event to take place in the Bay of Plenty at the end of September. Winners in the Auckland and Northern region have already been announced, with Josh Woodcock from Pukekohe named as Auckland’s winner and Jonathan Spurdle from Devonport named as the Northern region’s winner.

The Apprentice of the Year competition is owned and managed by the Registered Master Builders Federation (RMBF), sponsored by Carters, partnered by the Building and Construction Industry Training Organisation (BCITO) and supported by the Department of Building and Housing.

The competition is open to all carpentry apprentices in New Zealand that meet the entry criteria, regardless of who they work or train with. Apprentices, employers and those young people aspiring to be a part of the construction industry are encouraged to join up to the Apprentice of the Year Facebook page by searching RMB Carters Apprentice of the Year.